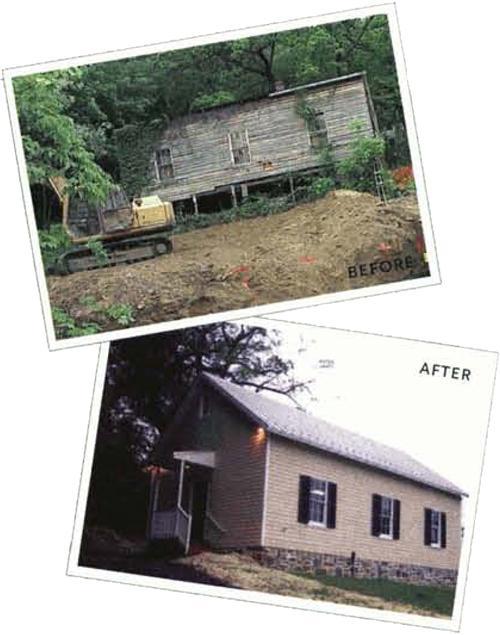 A historic school house that was both a symbol of racism and a ray of hope for generations of black families is once again a place of learning — only this time, the lessons go beyond the three R’s to explore community and family roots.

The recently restored Ellicott City Colored School, located in Ellicott City, Md., is Howard County’s first school built with public funds for black children. “Previously, colored schools, as they were called, were held in churches or whatever building might be available,” says Adele Air, historic sites program coordinator for the Howard County Department of Recreation & Parks, which purchased the school property and oversaw the renovation, “I believe that even though the Ellicott City Colored School, Restored reflects the racism of the late 19th century, it is a milepost in the ongoing struggle for equality.”

Built during the 1880s, the 27 × 40-foot school housed eight grade levels in two tiny rooms. It lacked electricity and was warmed by a potbellied stove until the early 1930s. After closing in 1953, the school was forgotten until a genealogist rediscovered it, covered with foliage, during a 1989 cemetery research trip. Several groups, including the Afro-American Historical and Genealogical Society’s Central Maryland Chapter and the Friends of the Ellicott City Colored School, Restored, launched a Herculean grassroots effort to rescue the school from near ruin.

As part of the $1.2 million restoration — funded by everything from yard sales to government grants — the Army Corps of Engineers built a retaining wall to hold back a creek that threatened to wash away the ground beneath the school. The now-one-room schoolhouse has been reincarnated as a living history museum and genealogical resource center.

“The Ellicott City Colored School, Restored provides visitors of any color the opportunity to engage in the history of Ellicott’s Mills-Ellicott City and the important contributions African-Americans provided for the development of the town, the state and the nation,” Air says. (The city was founded as Ellicott’s Mills in 1871.)

Resource center staff will direct visitors to information sources, rather than conduct records research. “Howard County is in the center of a great research area, and we don’t need to duplicate those sources,” says Sylvia Cooke-Martin, a genealogist and head of the Friends group. “Instead, we will help people develop a research strategy.” The resource center emphasizes African-American families from Howard County, as well as Maryland’s US Colored Troops who fought in the American Civil War.

Cooke-Martin hopes the restored school will help fill in the gaps African-American researchers frequently encounter in their family histories. “There is a myth that our African-American history is lost. We want to dispel this myth. Every family has a success story, someone who made significant sacrifices for survival.”

The Ellicott City Colored School, Restored is open from 10 a.m. to 2 p.m. Tuesdays and Saturdays, and by appointment. Visit the Ellicott City Restoration Foundation Web site at <www.ecrf.org> or call (410)313-1413 for more information.
From the February 2004 Family Tree Magazine.

Since literally trillions of newspaper pages have been published throughout world history, genealogists have plenty of fodder for newspaper digitization…

The 2017 FamilySearch Worldwide Indexing Event is October 20-22nd. We've got the details on the purpose of the event and…

On the season premiere of "Finding Your Roots", Bernie Sanders and Larry David, found out they're actually related. Here are…

After almost 100 years, original German street names may be returning to Cincinnati. Why did they ever change in the…