Francisco Vasquera de Coronado came to Arizona in 1540 in search of the “seven cities of gold.” The Zuni Indians pointed him west, hoping the Spanish would leave their area, which had already been inhabited by native people for some 12,000 years. Other tribes from Arizona include the Cochise, Anasazi, Mogollon, Apache, Navajo and Hopi. The Hopi village of Old Oraibi is the oldest continuously inhabited place in the United States, dating back more than 1,000 years.

Though the Zuni didn’t entirely detour the Spanish, Arizona was slower to be colonized than neighboring New Mexico. Tucson wasn’t founded until 1775, and the settlements were concentrated in the southern part of the state when Arizona became part of Mexico (as a part of the state of Sonora) with independence in 1821. The Treaty of Guadalupe Hidalgo in 1848 ended the Mexican-American War and closed the long chapter of Spanish-Mexican rule north of the Gila River in Arizona. The rest of present-day Arizona was added to the United States with the Gadsden Purchase in 1853. The Arizona Territory was split off from the New Mexico Territory in 1863, but statehood didn’t follow until 1912 — the last of the contiguous United States.

Today’s Arizona largely sprang up after World War II, as Americans flocked to the sun. Between 1950 and 1990 the population of Phoenix increased from 100,000 to 980,000. In 1960, the Del Webb Corporation, created Sun City, launching Arizona as a retirement haven. 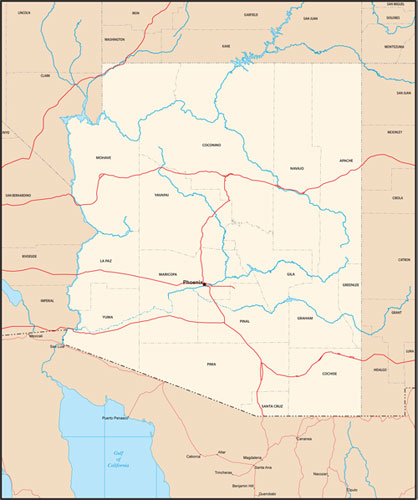 Return to the main Arizona page

Expert answers on researching ancestors in Mexico and the early American Southwest.

Find contact information for archives, libraries and other genealogical organizations in Arizona.

Our county-by-county listing of Arizona has contact information and dates vital records for historic and modern-day counties.