What would become Washington state was the object of a sort of ping-pong match for the first centuries of European exploration: It was first claimed by Spain in 1543, and then by England in 1579, after Sir Francis Drake sighted the coastline. The Spanish actually landed in 1775; Captain Cook claimed the Olympic peninsula for England in 1778. Finally, the Treaty of Nootka in 1790 mostly settled Pacific Northwest claims in favor of England.

But England’s claim didn’t remain undisputed. Americans Robert Gray and John Kendrick had already visited in 1788; Gray discovered the Columbia River in 1791. Lewis and Clark reached the river’s mouth in 1805. American and English fur traders soon established rival forts near present-day Spokane. American missionaries arrived in 1836, and Oregon Trail pioneers came en masse starting in 1843. The conflict came to a head in 1844 with James K. Polk’s election-year battle cry of “54-40 or Fight.” War was averted and the 49th parallel set as America’s northern boundary in 1846.

Throughout this period, Washington was considered part of Oregon, and it was incorporated into Oregon Territory in 1848. Congress included it in the 1850 Donation Land Law, which provided grants of 320 acres per settler. Spurred by the law and a fledgling timber industry, settlement surged. Seattle was founded in 1852. Citizens eventually demanded a separate Washington Territory, which was created in 1853.

Native tribes increased their resistance during this heightened period of colonization. A series of Indian wars filled the 1850s. Ultimately the tribes, including the Puyallup, Kalispell, Bannock, Yakima, Paiute and Nez Perce, were exiled to reservations. Nez Perce Chief Joseph surrendered in 1876, proclaiming, “I will fight no more forever.”

The discovery of gold in 1860 and the passage of the Homestead Act in 1862 made Washington irresistible. The transcontinental line of the Northern Pacific Railroad reached Spokane in 1881 and Tacoma in 1887. At last, Washington became a state in 1889. 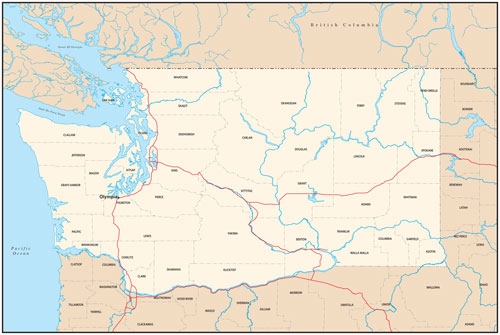 Return to the main Washington page

 How to Link Digitized Records to Your Family Tree
Online Tools for Sharing Family Photos and Stories
How to Use Notion for Family History Projects
MyHeritage for Free: 10 Tips for Using It Without a Subscription

Find contact information for archives, libraries and other genealogical organizations in Washington.

Our county-by-county listing of Washington has contact information and dates vital records for historic and modern-day counties.

Get your search started with these essential Washington State resources.