The state archives finally got back to you. At last, the copies are in your hands. Or maybe you were rifling around in the attic and uncovered a box of letters nobody knew about. It’s the document that could blast through that fortresslike brick wall you’ve been banging your head against. You’d feel like you just won the genealogical lottery, except for one minor detail: You can’t read a word of it.

Fortunately, it’s possible to decipher old, illegible and oddly spelled documents. By employing a few tools, a little knowledge and these five tricks, you can read almost any document.

The first thing you’ll need to do is get cozy with modern technology. Don’t try to decipher the handwriting directly from the original document, especially if you’re looking at it in an archive or courthouse. You’ll need to take plenty of time to examine the writing, so make photocopies, take digital pictures or — best of all — scan the document. If you’re viewing a microfilmed record, make a printout.

Even if you’re the owner of the original record, it’s a good idea to work from a copy. First, you can avoid repeatedly handling and possibly damaging the document. Second, it’s a lot easier to read photocopies, since the black letters stand out better against a white background than against the tan shade of old paper. Plus, you can write on photocopies — as you’ll see, making notes on the document is an essential part of the decoding process.

Best of all, photocopying and scanning give you “zoomability,” an essential for some deciphering jobs. A copy enlarged to 1,000 percent lets you inspect pen strokes closely enough to see where they overlap and change directions, giving you a better idea of the letters the writer intended to form.

If you’re looking at a scan on your computer, you can get ridiculously close — enough to tell if the quill pen tip had a tiny split. Years ago, I made a full-page photocopy of a single word in a letter from famous ringmaster P.T. Barnum, who was infamous for his horrible penmanship. I hung the copy at my desk and stared at it every once in a while. Eventually, the word revealed itself: Jumbo, Barnum’s famous elephant.

Not only can you use a photocopier to enlarge a document, but you also can play with the density controls to enhance the contrast and make the writing stand out more.

Photocopy a document on several settings, since different ones might work best for different parts of the document. You can get even more sophisticated if you scan your document, take a digital photo of it or download it from the Internet: Use a photo-editing program, such as Photoshop Elements, to adjust the contrast, brightness and color levels (look under Enhance > Adjust Lighting in Photoshop Elements).

Experiment to see which adjustments help the most — just be sure to work on a copy of the image so you don’t have to scan it again if you mess up.

Your ancestors’ unusual ways with words easily can trip you up. Spelling wasn’t standardized until relatively recently, and people often wrote words the way they sounded. The further back you go, the more phonetic spelling you’ll find.

To make matters worse for genealogists, if s quite common to see different spellings of someone’s name. Regional accents, limited education and simple errors all can produce dramatic spelling variations. If your ancestor spoke his name to a town clerk who wrote it down, letters such as c and k may have sounded alike, or the clerk may have omitted silent letters such as the k in Knight, or the c in Schmidt.

Some people even spelled their own names differently from one day to the next. So make a list of the potential mutations you might encounter. In my own case, I’ve come across Arsenault, Areseneault, Arseneau, Arsenaux, Arseneaux, Arsenalt, Arsenaul, Arsenaulte, Arsenauld, Arsenaud, Arceneaux and, if you include junk mail addressed to me, Arsenabavlt, Arsenaut and Earsneal.

Our ancestors not only spelled names and words in various ways, but they abbreviated liberally. Sometimes you’ll see just the first letter or two of a name, with a small last letter tacked on at the end. Or maybe the writer used lines or dots instead of groups of letters. See this page for a list of common abbreviations and short forms of names. See also our guides to male and female nicknames.

Lots of other abbreviations crop up in genealogical documents, too. With each kind of document, each era, and each geographical area, you’ll have to become familiar with a new batch of abbreviations. In British documents, for example, Lo means Lord, M means Majesty, and so on. You’ll find more of these in The Record Interpreter: A Collection of Abbreviations, Latin Words and Names Used in Historical Manuscripts and Records by C. Trice Martin (Phillimore & Co.).

3. Familiarize Yourself with Letters

First, as you research back in time, you’ll need to become familiar with the class characteristics of each era you work in. See English Handwriting Online for information on when various styles were common. For example, in documents from the 1700s and 1800s, an s may resemble a lower case, cursive f (in a double s, the second s may be written normally — Jesse looks like Jefse). The lowercase as, os and us often appear similar; as do the uppercase S, L and T. In very old texts, you may see an e that looks backward or a thorn — a character resembling a y, it represents th. A ye means “the.”

Say you’re looking at a handwritten document, and you’ve uncovered all the class characteristics you can. Now you’ll ferret out the writer’s individual characteristics. Look for familiar words first — names of months and days, the and and,and archaic phrases such as “Know all men by these presents …” (“Let all know …”), which is used in early American legal documents. By carefully examining these, you can identify idiosyncratic formations of specific letters.

For example, most writers have a characteristic way of forming the th letter combination. Once you find it in a familiar word, such as the, you can skim the document and pencil in a th wherever it occurs in a word you don’t know. Then move on, looking for another letter or letter combination you can positively ID. As you work with your document this way and become more familiar with the particularities of the handwriting, you’ll find reading it gets easier. Try the example on the opposite page to see how this works.

For an especially difficult document, you may need to bring in the big guns and make an alphabet. Forensic examiners frequently use this technique. Simply make a key like the one at right by cutting and pasting (digitally using photo-editing software, or on paper with a photocopier) examples of identified letters. Add examples of every letter you know with a reasonable degree of certainty.

When you’re faced with a difficult word, compare each letter to those on your key. Write down all of the possible letters of the word in a sort of matrix, such as the one below. According to this matrix, the first letter of this name could be an M or a U, we’re sure the next one’s an a, the two after that could be ts or ls, there’s definitely an h after that, and so on. Then you can scan the possibilities and make educated guesses of the right words. When you’re confident you know the word, write it on your photocopy of the document and type it in a separate transcription.

5. More Tricks of the Trade

Even the pros get stumped. Try their secrets when it happens to you:

Common Issues to Watch Out For

Here, professional genealogist D. Joshua Taylor highlights tips for understanding these letters and other characters to watch out for.

These letters that can look alike in lower-case form. 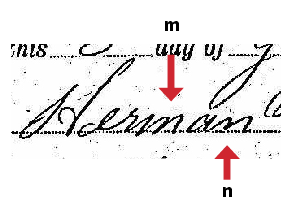 Undotted is and uncrossed ts can resemble each other, or an e or an l. Also watch for misplaced crosses and dots (in the name below, Miller, the dot is over the e, making it look like an i). 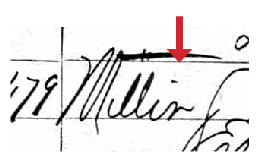 Names may be abbreviated (these abbreviations are for John, Elizabeth, Nicholas and George). Here’s a link to more common abbreviations for English given names.

A double-letter formation may be abbreviated as a single letter below a horizontal line.

These abbreviations for “ditto,” common in records formatted in rows (such as a census) mean “same as above.”

The s, especially in a double-s formation, may have a long flourish. This “long s” is easily confused with a p or an f. (This word is “blessing.”)

This character, called a thorn, occurs in very old texts and looks like a y. It represents th, so the example here (from the 1620 Mayflower Compact), with an e over the thorn, means “the.”

These numerals may look alike. If the record has page numbers, copy pages one through 10 to use as reference samples.

This Waterbury, Conn., prison register almost certainly belongs to someone named Matthew (1). But what’s his father’s name (2) — is it Matthew, too? Could it be Matthus? Malthus? Are you sure the first letter is an M? Looking at just one word in isolation can be dangerous, but when you use words you know to identify individual handwriting quirks, the focus gets sharper.

Watch this theory in action:

A version of this article appeared in the May 2006 issue of Family Tree Magazine.

FamilyTreeMagazine.com is a participant in the Amazon Services LLC Associates Program, an affiliate advertising program designed to provide a means for sites to earn advertising fees by advertising and linking to Amazon.com and affiliated websites.

The Genealogist’s Guide to Local Histories

Local histories are among the best sources for biographical information about your ancestors. Here’s what these histories can contain, and…

How to File a FOIA Request for Genealogy Records

The Government and Genealogy Records: What You Should Know

Learn what records the government creates, how to access them, and why genealogists should vote.