Note: The majority of these articles relate to English and Welsh ancestor research specifically. Click here to see articles and resources covering a broader scope of United Kingdom records and research tips.

FROM THE FAMILY TREE SHOP

This cheat sheet download includes information about English genealogy records and how to find English records online, plus quick guides to the history and geography.

How to Research English Ancestors

A Quick History of British Immigration 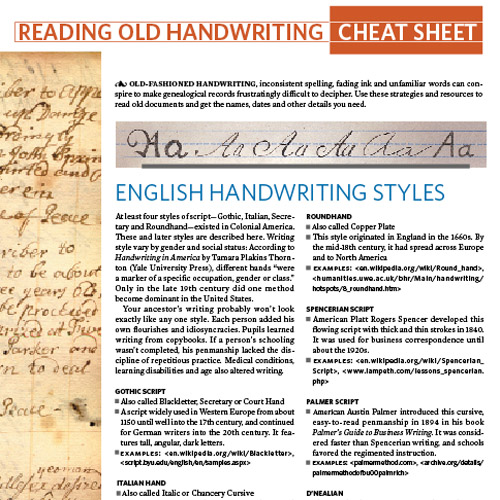 Old-fashioned handwriting, inconsistent spelling, fading ink and unfamiliar words can conspire to make genealogy records frustratingly difficult to decipher. Use the at-a-glance strategies, tips and resources in Family Tree Magazine’s reading Old Handwriting Cheat Sheet to read your ancestors’ old documents and get the names, dates and other details you need. $9.99

How to Research Your Welsh Ancestry Online

How to Search Free Collections on Findmypast

12 Strategies to Find Your Ancestors on Findmypast.com

Chapman Codes and Why They Matter for English Genealogy Research

Does your ancestor have missing or conflicting birth dates? For English and Welsh ancestors, a bit of civil registration history can help lead you in the ri...

One US researcher brings home surprising souvenirs from trips to England, including a Civil War photo and a lump of coal.

How to Find Your Ancestors in the 1921 UK Census

Discover what the recently released 1921 UK census can teach you about your English and Welsh ancestors.

Does your ancestor have missing or conflicting birth dates? For English and Welsh ancestors, a bit of civil registration history can help lead you in the ri...