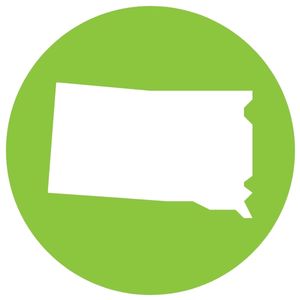 It’s hard to argue about South Dakota’s beauty, with its pastoral prairies (childhood home of Laura Ingalls Wilder of Little House on the Prairie fame) and monumental mountains (both Mount Rushmore and the in-progress Crazy Horse Memorial). Discover your ancestor’s story there with the following tips and resources for researching your family in the Mount Rushmore State.

US TERRITORY OR
COLONY SETTLED

Prior to European or American settlement, Native groups (notably the Arikara, Mandan and Hidatsa) had lived in the area for centuries. The state’s namesake, the Dakota/Lakota/Nakota Sioux, originated in neighboring Minnesota, but moved westward into the modern Dakotas by the mid-18th century. After Frenchman René-Robert Cavelier, Sieur da LaSalle’s expedition to the Great Lakes in 1682, France claimed the whole of “Upper Louisiana,” including modern South Dakota. Throughout the 18th century and up to 1803, South Dakota was part of this Louisiana Territory, which changed hands from France to Spain in the 1760s, then back again to France in 1801. The United States purchased the lands from France for pennies per acre in 1803, including nearly all of modern South Dakota. (The very northeastern-most portion of the state was ceded by Britain in a separate treaty in 1818.) Remote from other settlements in the region, South Dakota was sparsely populated by white settlers (except for fur traders) until the mid-1800s. The US government initially administered the whole South Dakota region as part of various territories: Louisiana, then Missouri, then “unorganized” or “Indian Territory.”

But the two halves of the modern state, divided at the Missouri River, were administered differently beginning in the late 1830s. The western portion remained part of “unorganized” territory before becoming part of Nebraska Territory, while the eastern half was part of Iowa Territory, then Minnesota Territory, then unorganized territory. As American settlement grew in the region, so too did conflict between settlers and Native tribes. In an attempt to keep the peace, a treaty in 1851 reserved large swaths of land in South Dakota and other Plains territories for Native settlement. But interest in the area (including its organization into Dakota Territory in 1861 as well as the Homestead Act of 1862) continued to rise, and many American settlers failed to respect the treaty’s provisions. The government and Sioux struck a new deal in 1868, and the resulting Great Sioux Reservation set aside land for that nation that included all of modern South Dakota west of the Missouri River, plus some land in North Dakota and a county in Nebraska. Prospectors discovered gold in the Black Hills (part of the Great Sioux Reservation). A gold rush that followed caused the population of Dakota Territory to quadruple in less than 10 years, with immigrants flocking to the area. Tensions boiled over in the Great Sioux War, beginning in 1876. Notable events include the Sioux victory at the Battle of Little Bighorn (“Custer’s Last Stand”) in nearby Montana, though the US government ultimately won the war. The Sioux were forced to give up the Black Hills region, then the Great Sioux Reservation was disbanded.

In its place were a handful of smaller reservations, many of them noncontiguous and operating into the present. The Wounded Knee Massacre on Pine Ridge Reservation in 1890 largely ended armed conflict. But legal battles over ownership of the Black Hills continue to the present, with a 1980 Supreme Court ruling that Sioux Nation was entitled to financial compensation for the land. South Dakota was admitted as a state in 1889, at the same time as the separate North Dakota. Since then, the state has developed robust agricultural and industrial economies, despite setbacks like the Dust Bowl of the 1930s. Tourism is another of South Dakota’s industries—Mount Rushmore, completed in the Black Hills in 1941, attracts more than 2 million visitors each year.

1817
Fort Pierre is established, the foundation for continuous American settlement in the area
1851
The Treaty of Fort Laramie sets aside large swaths of land in western South Dakota (and other territory) for Native peoples
1861
South Dakota is part of the newly created Dakota Territory, with Yankton as capital

1868
A revised Fort Laramie treaty re-asserts western South Dakota as Native land, the “Great Sioux Reservation”
1874
Gold is discovered in the Black Hills, leading to a gold rush, a population boom, and a reduction of Native reservations
1889
South Dakota is separated from North Dakota and admitted as the 40th state

1890
Hundreds of Lakota are killed by the US army in the Wounded Knee Massacre
1916
Jones County is created, the latest of South Dakota’s 66 counties to be incorporated

Keep this South Dakota genealogy research information handy with a printable PDF! This four-page download includes everything: South Dakota’s history and online records, the best websites for genealogists, listings of key libraries, archives and societies that hold the records you need, and a timeline of key events in the state’s history.

The state began keeping birth, death and marriage records in July 1905, but various vital records (especially of marriages) may be available earlier in many counties, startingabout 1880. Order vital records for your family through any county or state register of deeds office. Informational copies are available to request for genealogical use; certified copies are restricted to direct family members or legal agents of the person named in the record. Note: Any register of deeds can access post-1905 vital records from anywhere in the state; you don’t need to order from the specific county where the event took place. If the county does not have access to the original photostatic copy, then the record will be mailed to the applicant the next day.

Marriage record images up to 1955 are available on Ancestry.com (free to subscribing libraries). That collection has an index for subsequent marriages up through 2017, as of writing.

Death records are not available online, but Ancestry.com has an index to deaths up to 1955.

As the history section indicated, South Dakota was part of the United States for more than 80 years before becoming a state. As a result, its residents appeared variously in US federal censuses until that point. Though not incorporated until 1861, Dakota Territory appears as a browse option in online collections of the 1860 census. (South Dakota was technically part of Nebraska Territory or considered “unorganized” at the time.) By contrast, the 1870 census covered Dakota Territory in its own right, but included only the most populated areas (mostly along the Missouri River and in the southeast corner of the state).

The 1880 census covered much of eastern South Dakota, again as part of Dakota Territory. But some northern counties were omitted, as was most of western South Dakota (still unconsidered Indian Territory). The exceptions were some counties in the Black Hills area, or river counties that housed civilians or military employees. Because most of the 1890 federal census was destroyed, the 1900 enumeration is the first surviving decennial census to cover the whole state. South Dakota took its own censuses beginning in 1885, in which only the most populated areas are recorded. That enumeration also included a record of Civil War veterans. Subsequent state-specific censuses were taken every 10 years from 1895 through 1945, making them nice complements to the federal census. You can find South Dakota state and territorial censuses at FamilySearch and paid sites Ancestry.com, Findmypast and MyHeritage; the state archives have original records.

Reservations and other land held by Native peoples were not included on federal censuses until 1940 (save for a separate Indian population schedule in 1900 and 1910), and only sporadically in state censuses. But if you have Native ancestry in the state, a separate enumeration—annuity rolls—will be useful for you. These were taken every year from 1885 through 1935 by various federal Indian agencies across South Dakota. The state archives has copies of the available agency census and guides to agency records .

Federal land—including some in South Dakota—opened to eligible applicants in 1862. But settlers might have received homesteads earlier than that via other means, including cash exemptions, military patents, mineral or livestock claims, desert land claims or Indian allotments. The South Dakota Land Patent Register, also known as the South Dakota Tract Books, shows the first date that the homesteader filed for a piece of land, the land’s value, as well as the type of homestead and the date of final entry file. You can search an index of land patents at the Bureau of Land Management’s General Land Office website. Note that subsequent land exchanges were handled at the county level.

The start archives have naturalizations up to 1987. The indexes there (one each for first and second papers) have enough detail to confirm if the applicant is your ancestor, order original records, or continue your research into other resources, such as ships’ passenger lists. Request post-1906 applications at the U.S. Citizenship and Immigration Services website.

The South Dakota State Archives has a guide to military records from various conflicts or assignment posts. Servicemen were active in the area as early as the 1830s, and volunteers from Dakota Territory formed volunteer regiments for the Union during the Civil War. Records of both militia/National Guard troops and armed forces regulars are under county jurisdiction or with federal military records, with copies on sites like Ancestry.com or Fold3.

The South Dakota State Archives collections include most newspapers ever printed in the state, from 1858. Entries include publications in several different languages, and dozens of South Dakota titles have been added to the free Chronicling America site.

With A Shirt Tail Full of Type: The Story of Newspapering in South Dakota by Robert F. Karolevitz (South Dakota Press Association)

Dacotah Prairie Museum: Experience what life was like for the American Indians and early pioneers, and learn how the railroads affected the early settlers.

Historic Deadwood: Visit the original “Boot Hill,” see the saloon where “Wild Bill” Hickok was shot and discover the inspiration for the HBO TV series. You can pan for gold in the Broken Book Mine and test your luck in gaming rooms dating to the 1876 gold rush.

Ingalls Homestead: Charles Ingalls claimed this quarter section in 1880, and Laura Ingalls Wilder wrote many of her Little House stories about life here. Visitors can experience a covered-wagon ride, see a typical dugout home and step inside a prairie school.

The Journey Museum: This museum houses both the Sioux Indian Museum and Minnilusa Pioneer Museum, where guests can see Sioux artifacts and learn about the history of the western Great Plains.

Mount Rushmore National Memorial: Gutzon Borglum’s granite faces of George Washington, Thomas Jefferson, Abraham Lincoln and Theodore Roosevelt attract more than 2 million visitors annually. Take a guided tour along the Presidential Trail to the memorial’s base, where a park ranger will explain why these four presidents were selected for the carving.

National Music Museum: This “Landmark of American Music” showcases more than 13,500 American, European and non-Western instruments from many cultures, dating mainly from the 16th century to the present day.

Our county-by-county listing of South Dakota has contact information and dates vital records for historic and modern-day counties.