Fifty-five boxes of bones arrived in Hawaii on Wednesday, Aug. 1, after being released to the United States from North Korea.

The boxes are believed to contain the remains of U.S. or other UN  service members who fought in the Korean War. Now that the boxes have arrived on U.S. soil, the Defense POW/MIA Accounting Agency (DPAA) will begin the task of identifying the remains and matching them with families awaiting their return.

Traditional identification of remains in such cases involves analyzing bones, dental records, uniforms, ID tags, jewelry and other personal belongings. These methods can help narrow down an ID by determining the person’s sex, race, size, age, previous injuries and cause of death.

But these 55 boxes came with only a single dog tag.

Because of this, DNA will play a vital role in identifying the remains and returning them to their families.

How is DNA used to identify human remains?

The DPAA’s forensic analysts extract DNA from bones and compare it with DNA samples that relatives of MIA soldiers have submitted. The types of DNA that can help identify remains include nuclear DNA, mitochondrial DNA (mtDNA) and Y-DNA.

Nuclear DNA is in the nucleus of the cell, and includes autosomal DNA. This type of DNA is especially helpful in identifying unique individuals, but time and environmental factors (heat, humidity, etc.) can degrade the quality of the DNA. Y-DNA testing is limited, because it can be used to trace only male service members.

The DPAA estimates it will identify as many as three-fourths of the remains using mitochondrial DNA, which is found in the cell’s mitochondria and is passed down from a mother to all her children.

Mitochondrial DNA is more durable and in greater abundance than other types of DNA. According to the DPAA’s website, “There are hundreds to thousands of mitochondria per cell. Each mitochondrion contains its own DNA, separate from the nucleus. Even after many years, during which time all DNA degrades to some extent, mtDNA can be found in very small fragments of biological material. If it is of sufficient quality, it can be tested and a sequence can be generated.”

Relatives of military MIA are encouraged to submit DNA

Of the nearly 7,700 Americans known to be missing in the Korean war, DPAA has family reference samples on file for 91 percent.

The Veterans of Foreign Wars encourages families of lost service members to submit their own samples to assist in the effort to reunite families with their loved ones. It’s a process that could take anywhere from months to years, depending on the case. 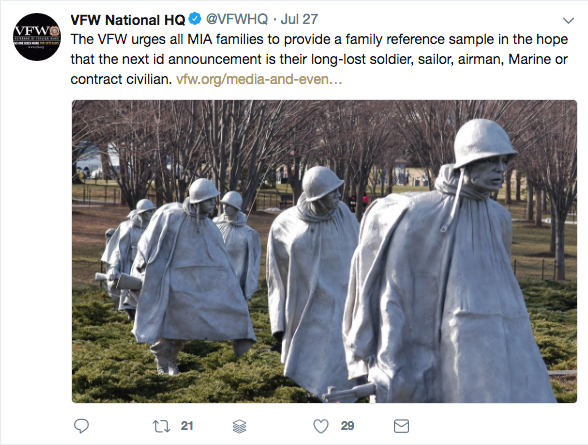 For more information about donating a DNA sample, visit the DPAA’s website.

You can find the names of military MIA and get information on the search for them on the DPAA website.

If you’re researching an ancestor who served in the Korean War, get started with these tips.

Want to learn more about your ancestor’s military service? Learn strategies for finding your ancestors who served in the military, including how to research Civil War ancestors, find military service records and interpret draft registration cards with the Genealogist’s Military Records Field Manual. 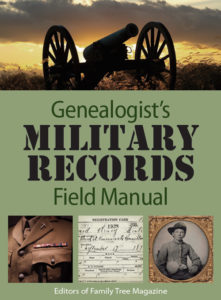