Crossing the Delaware: A Battle of Trenton Map 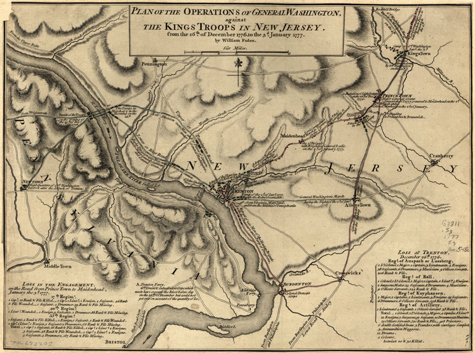 Image via the Library of Congress.

Christmas came a bit late for the earliest members of the United States Army. In the early days of the Revolutionary War, the rough-and-tumble Colonial army defeated unsuspecting Hessian soldiers in a surprise attack in Trenton, New Jersey. Still dazed (and, by some accounts, hungover) from Christmas celebrations the night before, the Hessians easily folded before the advancing Patriots. The British, caught offguard, failed to retake Trenton a few days later. This Battle of Trenton map help tells the story.

The map above displays the two armies’ movements between Dec. 26, 1776, and Jan. 3, 1777. Continental forces are in green and Hessian and British forces in red. As you can see, annotations detail of each regiment’s movement and engagement throughout the week.

Battle maps like this contain valuable details that can help you track military ancestors, particularly if you knew what regiment they served in. Military history buffs will also appreciate the detail, including information about tactical movements, topographical clues and the designations of Hessian soldiers captured as prisoners of war. The Library of Congress has several maps like these for the Revolutionary and Civil Wars.

The Battle of Trenton was an important moral victory for the Continental Army. Many troops’ enlistment periods were about to end, and Washington needed to convince his men to re-enlist. He also hoped to encourage the public that American victory was possible. Washington lost just a handful troops during the encounter, most due to frostbite rather than combat. (A young James Monroe, who would later become the fourth president of the United States, was wounded during the battle.)

If the Battle of Trenton isn’t ringing any bells, perhaps you’ll recognize this: 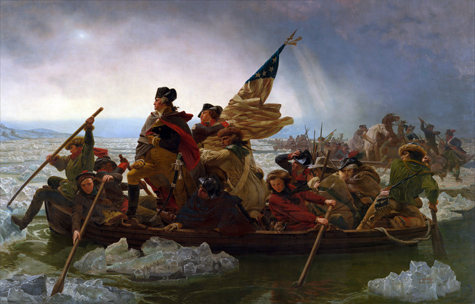 Emanuel Leutze’s “Washington Crossing the Delaware” is one of the most recognizable pieces in American history. It displays Washington and his troops in the lead up to the Battle of Trenton. In the early hours between Christmas Day and December 26, Continental troops rowed across the nearly frozen Delaware River to get in position. You can see this advance on the map (“Parade of the Troops on the evening of the 25 of Dec., 1776”), where the river is noted as being “full of Ice.” The army crossed the river a total of three times throughout the week.