Uncover your ancestors in all kinds of genealogy records using the tips in the Document Detective PDF download. This guide will teach you how to use census records, birth records, draft registrations, and more.
BUY NOW

When the US government acquired land through purchases or treaties, these lands became public lands. The states founded in these areas became known as public-land states. The US government then sold this public land to private individuals or firms through land patents. To acquire a land patent, a person had to apply for a parcel of land and a survey was ordered to define the parcel’s boundary lines. Once the boundaries were established, the applicant paid cash for the land or provided proof of credit and received a receipt for the purchase.

After a waiting period during which he improved the land as required by law, the applicant could apply for a title to the parcel. The land office in the area would review the request and issue a title to the owner, who also could request a copy of the land patent document.

The Bureau of Land Management’s General Land Office (GLO) has digitized more than 5 million land patents and made them searchable at glorecords.blm.gov. They cover mostly the Eastern states of Ohio, Michigan, Indiana, Illinois, Missouri, Arkansas, Louisiana, Mississippi, Alabama, Iowa, Minnesota, Wisconsin and Florida, as well as some Western states after 1908. For pre-1908 patents in Western states, contact the BLM land office for that state. If you can’t find an online patent for Eastern public land states, you can obtain an Eastern States Patent Request form here. 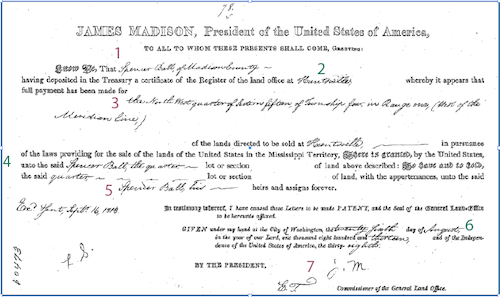 Once you have your ancestor’s patent, note the information about the section, township and range where the land was located. Land entry case files, available from the National Archives for a fee, may contain application materials such as correspondence, copies of receipts and even marriage documents. You can order copies of the case file online at archives.gov/forms.

2. The location of the land office can help you determine where you might find additional documents.

3. The legal land description of the parcel being applied for is given in quarter, section, township and range. Use this information to request the land entry case file and identify the land on a plat map. On a plat map, work from largest area to smallest: Identify the range, then the township, then the section and finally, the quarter or lot.

4. This line confirms that the applicant is legally purchasing the lot or section described.

5. The patent confirms that the purchaser owns the land and can legally bequeath it to his heirs forever.

6. Use the execution date of the patent to help you narrow where families should be in census and vital records near this time. But remember the land patent might have been executed long after your ancestor filed his claim, due to
GLO backlogs and waiting periods.

7. The form is issued by the authority of the US President, but is signed or initialed by the commissioner of the General Land Office or a clerk.

A version of this article appeared in the December 2012 issue of Family Tree Magazine.

How to Use Land Records for Genealogy Research
Land records are among the most underutilized resources for genealogy. Discover the different types and information you can learn from each.
Family Tree Magazine
5 Types of Ancestors’ Land Records You Should Look For
Looking for clues about your ancestors’ relationships and migration patterns? Discover your ancestry and find family history with these five type of genealogy land records.
Family Tree Magazine

Finding My Ancestor’s Old Property Deed: Tips You Can Use

Your ancestors' old property deeds can reveal valuable information about them and where they lived. Here's a guide on how…

How to Use Land Records for Genealogy Research

Land records are among the most underutilized resources for genealogy. Discover the different types and information you can learn from…