How to Decipher Your Ancestors’ Letters and Diaries

My husband works with computers, not old documents, so one night when he glanced over as I sat transcribing a census page, he cried, “How can you read that?” Used to the uniformity and predictability of fonts on a computer screen, he was baffled by the curlicues and chicken scratches on the old census document. He couldn’t read it at all.

You may have felt the same way when you’ve struggled to decipher handwritten pages about your ancestors, from census pages to deeds to personal family letters and diaries. The answers you’re after may be there, but they might as well be written in Martian.

The good news is, as I reassured my husband, the more you read older documents the more familiar you’ll become with old-fashioned handwriting. But it does take patience to learn to read and transcribe unfamiliar script and to understand the clues in a manuscript.

Eventually, you can even “read between the lines.” While graphologists claim that handwriting analysis provides insight into the personality of the writer, there are also genealogical hints in a person’s handwriting. For instance, penmanship can establish a time period for a document and the educational level of the person who wrote it.

Here are seven steps to help you get started discovering new things about your family through their handwriting:

Today we equate literacy with being able to read and write, but that’s strictly a 20th-century concept. In earlier centuries, writing was taught separately from reading. In fact, questions regarding an individual’s skill in reading and writing continued as separate columns on the US census until 1930.

Reading, after all, was important to study the Bible, but writing wasn’t deemed essential. Even signing your name wasn’t required: Officials wrote documents and men who couldn’t write signed their mark, a design that distinguished them from others.

As writing came to reflect economic affluence or social position, however, businessmen, clergy and public officials began to learn. In Colonial America, individuals could enroll in private writing classes as early as 1684, or use self-teaching manuals. In the 18th and 19th centuries, penmanship masters traveled around the country teaching the fine art of handwriting to persons wanting to sign their name or to young women using penmanship as a means of artistic expression.

Handwriting is not only different for each generation of your family tree, but also reflects the writing technology available at the time. The shape and style of the pen nib influenced the development of new handwriting methods. For example, it’s difficult to create certain scripts with a flat pen nib. You can study 20th-century handwriting methods by asking relatives to write the alphabet on a separate sheet of paper and comparing them. While individuals tend to develop their own style regardless of the method taught in school, certain letter formations will let you identify when they were taught to write and in what script.

As you become familiar with different types of handwriting, you can set an undated document into a time frame and learn more about the person who wrote the words. In Colonial America, most of the population learned one style of handwriting, but well-educated individuals often learned several different methods of script or “hands.” For instance, John Winthrop of Massachusetts often wrote in various scripts within the same sentence. At least four different calligraphic styles of script — Gothic, Italian, Secretary and Roundhand — co-existed in Colonial America.

Men and women often learned different scripts, so someone would be able to identify the sex of the writer from their handwriting. The same was true for social status: Private secretaries wrote in a particular style, while their employers would sign in another, thus establishing that they did not write the document. According to Tamara Plakins Thornton, author of Handwriting in America (Yale University Press), different hands “were a marker of a specific occupation, gender or class.” Not until the late 19th century did one method become dominant in the United States.

Here’s a quick look at some styles you’ll encounter, and when they were popular:

Reading between the lines

Handwriting can reveal more than just what your ancestor was writing about — it also may reveal personality traits of the writer herself.

Since the 1600s, various theorists have tossed around the idea that handwriting reveals personality. But it wasn’t until the 20th century that graphology — the inference of character from a person’s handwriting — emerged as a “science.” An individual’s character shows itself in the size of letters, along with how they are slanted, decorated, angled and curved (a t crossed near the top indicates vanity, for example). Today, psychologists, teachers, social workers and personnel departments hire graphoanalysts to study the handwriting of living persons. Certified graphoanalyst Christina Meide decided to apply her training to a longtime hobby: genealogy.

“Handwriting can show many amazing traits — good traits — in an individual who has taken the wrong road in life,” Meide explains. “It is not unusual for me to hear, ‘this can’t be right. My great-great-uncle was a horse thief and an unfaithful husband. This may be true, but Great-great-uncle was also a person with a very complicated personality. After all, he wasn’t born ‘bad.’”

To learn more about Meide and her work, see her Web site or write to her at 2040 105th St., Geneva, IA 50633.Also visit the International Graphoanalysis Society, they train handwriting specialists.

If you’ve ever tried to read a document from the 17th century or earlier, you know it can be like learning another language. Part of the reason it’s so challenging isn’t just the different script — you’ll also encounter variations such as these:

Having only one way to spell a word is a 20th century concept springing from widely available free public schooling and mandatory education laws. If you can’t figure out a word once you’ve transcribed it, try saying it aloud; it might be phonetic.

Older documents also often contain archaic words and phrases that are unfamiliar today, or words whose meaning has changed. Consulting the Oxford English Dictionary or a dictionary from the time period of the document will usually explain the meaning. There are also genealogical dictionaries of compilations of unusual words and phrases commonly found in materials used by family historians. You’ll find hundreds of free online dictionaries to help you with foreign, archaic and specialty terms.

Different styles of handwriting have idiosyncrasies that can lead to transcription errors. For instance, 17th-century documents written in Secretary hand are full of abbreviations and letter formations that look strange to us today. In Roundhand, the letter s is formed by a long flourish that’s easily confused with a p or an f.

In her best-selling book Unpuzzling Your Past (Betterway Books), Emily Croom offers these tips for making sense of old script:

Tackle these challenges one step at a time. Spend time poring over a document, looking at each word and identifying all the capital and lower-case letters that you’re sure of. When, you find a letter that’s indecipherable, try comparing it to letters in other words in the manuscript until you find similarities. There will be times when this doesn’t work, but in many cases you can locate an approximate match. Deciphering each document letter by letter creates a stylistic alphabet chart and builds your self-confidence.

Whenever I approach a new document, I think of my daughter who’s learning to read. She doesn’t try to read a new book all at once; she takes it one word at a time. When she encounters a word she doesn’t recognize, she tries to understand it in the context of the sentence. The same methods work for old documents. There are almost always words that will scare you with their illegibility. When this happens, step back from the word and read the rest of the document to see if you can pick up any contextual clues.

Remember how code breakers work, looking for patterns that let them turn gobbledygook into plain English. If you keep seeing a mystery letter followed by he, it’s probably a t, making the.

It may not be a problem with the handwriting that stops you from completely understanding a document. Physical deterioration — faded ink, water damage or worn documents — can obscure single letters or even whole paragraphs. My ancestors almost always end up on a census page smeared from exposure to water. 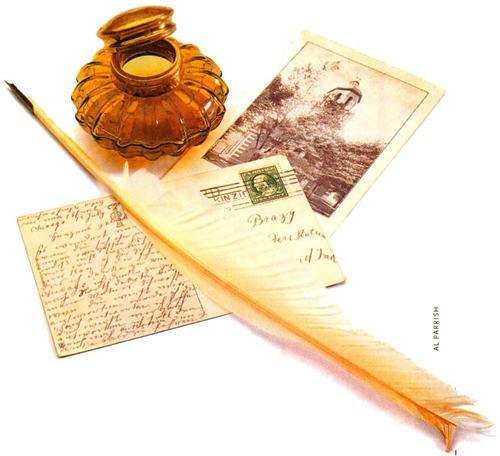 Don’t give up just because, say, old ink has faded; ultraviolet light can help you read faded ink. Family Tree Magazine contributing editor Sharon DeBartolo Carmack recommends using a pale blue or bright yellow paper to enhance old documents on microfilm. Place the paper on the microfilm reader so that the image projects on the paper, not the screen; it helps cut the glare. Ask other researchers how they overcome these physical roadblocks to reading old documents, and share your own secrets.

Still stumped? Sometimes a fresh set of eyes can help — enlist the aid of another researcher or a professional with manuscript experience. What you found difficult, someone else may be able to read effortlessly.

And be patient. Sometimes trying to read an old document takes hours or even days. While you want to be able to read it as easily as the words in this article, it may not be possible. You wouldn’t expect to learn Greek in an afternoon, so why set yourself up for failure by rushing the process? When you become frustrated, set the document aside for a day or two until you’re ready to try again.

Ultimately, the rewards are worth the effort. Reading an old family letter or diary is a bit like time travel. You have a sense of what your ancestors experienced, in their own words. Even deciphering an old census page or courthouse document in a stranger’s handwriting can be a thrill — you’re reading the words of someone who actually met your ancestor, after all.

Nothing in the sterile fonts on a computer screen can quite compare. So when my husband asks, “How can you read that?” I have to answer, “How can you not want to read it?”

From the October 2001 issue of Family Tree Magazine