Now What?: Sound It Out

Q. What’s the “lost rule” of Soundex, and how does it affect the codes for my ancestral surnames?

A. Soundex is an indexing system that groups surnames together by codes based on their consonant sounds. Each code begins with the first letter of the name, followed by three numbers, representing consonants in the name (see the Soundex key). To form the three-digit code, first strike out vowels and y. Most of us were taught to strike out h and w and treat them as vowels — but some names need the “lost rule” or the “H and W rule.” 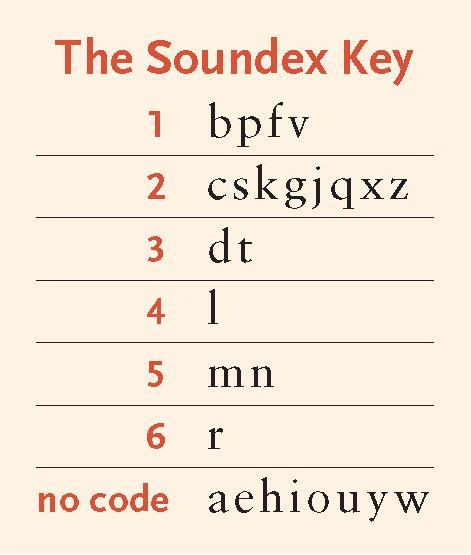 Based on original Soundex rules, letters of the same number code are coded separately when a vowel or y separates them, as in Leaman, L550. The letters h and w are usually disregarded, like vowels, unless they’re the initial letter of a name, for example, Ashton, becomes A235 (coding A-st-n). But different codes can occur when the h or w falls between two letters of the same code number, in combinations such as thd or tht (Rothdeutsch, Smithton), chs (Sachse, Ochs), chk (Wichkoski) and schk (Mitschke, Peschke). In such cases, disregard the h or w and push the like-coded letters together, with chs or schk coded as a single 2, not 22.

These examples show the use of the lost rule on 1900 census Soundex cards:

If you don’t find your name under the code using the lost rule, try the other possibility in case your name was Soundexed with the h or w treated the same as vowels.

? How to Research the 1930 Census Microfilm <1930census.archives.gov/beginsearch.asp> (select a state Soundexed in 1930)

? Yet Another Soundex Converter <www.bradandkathy.com/cgi-bin/yasc.cgi>

Note that when you choose the Soundex search option on various genealogy Web sites, your results may not adhere to the lost rule, or even original Soundex codes. The searches pick up other names with similar sounds, including, but not limited to, ones with the same Soundex code.

From the November 2008 Family Tree Magazine