HISTORICAL OVERVIEW
In what is now Arkansas, 16th-century Spanish explorers found a considerable Indian population living in agricultural settlements. Between 1673 and 1740, French explorers, trappers and traders traversed the area. By the end of the Seven Years’ War in 1763, France ceded to Spain all of Louisiana, the vast territory west of the Mississippi that included Arkansas. Later, as Napoleon prepared for retrocession of Louisiana to France, the Louisiana Purchase of 1803 made Arkansas US territory. By then, Osage, Caddo, and Quapaw Indians felt the push of Cherokee and white settlers moving into Arkansas.

Missouri and Arkansas were then part of the undefined district Upper Louisiana, and in 1805, became Louisiana Territory. For decades, Arkansas was a destination for white explorers and settlers, as well as a route for thousands of Indians forced from the Southeast to Indian Territory. The Caddo signed the last Indian land cession in Arkansas in 1835.

The state’s numerous rivers drain into the Mississippi and were important transportation routes in the 19th century.Many settlers came via the Mississippi and its tributaries, but swampy and flood-prone plains along rivers in eastern Arkansas limited the growth of towns there. Major towns developed farther upriver. One early road that invited settlement along its route was the Southwest Trail across Arkansas, leading into Texas.

Despite mountainous terrain in the north and west and forests statewide, settlers saw agricultural opportunity in the availability of cheap federal land or, for some, bounty land due them for military service. Before the Civil War, settlers streamed into Arkansas from neighboring states — especially Tennessee — and from Alabama, other southern states, and the Ohio Valley.

Cotton, often cultivated with slave labor, became the dominant crop on farms and plantations in the east and south. By 1860, slaves were a quarter of the state’s population. Wheat production was important in the north and west. Corn was a staple for people and livestock throughout the state.

Due largely to geography, settlement patterns and the state’s regional economies, antebellum political power rested generally in the south and east. By 1861, many Arkansans were Unionists. Secession was hotly debated. Only after the war began did Arkansas join the Confederacy. The Union army occupied northwest Arkansas during much of the Civil War. Both pro-Union and -Confederate state governments operated in the last year of the war. Hostilities included both formal military operations and guerrilla warfare.

Although the state rejoined the Union in 1868, reconstruction was difficult, with widespread poverty and discontent. Late-19th century economic development included railroads, logging and timber manufacturing. Post-Civil War decades also saw expansion of cotton farming, sharecropping and European immigration. In the early 20th century, Arkansas experienced growth in its textile, petroleum, and mining industries. But the economy remained generally rural and cotton-dominated until after World War II. By 1980, the rural population was slightly less than half the state total. 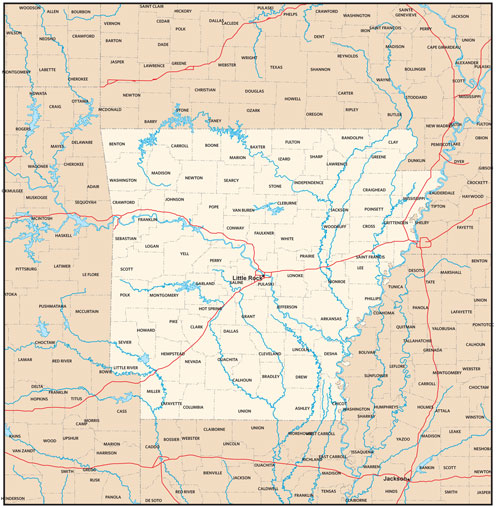 Return to the main Arkansas page

Researching The Natural State? We've got your quick facts, as well as the best websites, publications, and organizations.

Arkansas is well-known for its 47 hot springs. Learn more about these incredible thermal springs and their long history.

Ready to dig into your Arkansas family history? Get back to your Natural State roots with a healthy dose of…

How to find your ancestor's divorce record in Arkansas.