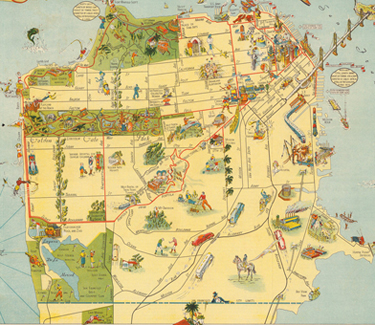 On this day in 1945, leaders from fifty countries met in San Francisco to sign the United Nations Charter, creating a pact between the world’s most powerful nations and (the signers hoped) ensuring a lasting peace. After two catastrophic wars in just forty years, the world was hoping to create a safer, more prosperous world—and they chose to sign it in San Francisco, a city that had exploded onto the national stage in the second half of the 19th century.

The map above (which you can view a zoomable, downloadable version of here) was created for attendees at the 1939 Golden Gate International Exposition, and it shows the City by the Bay just a few years earlier, in 1939. While other maps might focus on detailed place-names and realistic depictions of topography or scale, this colorful, almost cartoonish map highlights areas of local interest. Its readers were meant to use it for fun—not for statistical analysis or fire insurance—and the activities shown on this map may have been the same ones your ancestors partook in their free time.

Did your great-great-uncle head down to the Sutro Baths or enjoy walks through Golden Gate Park? Or maybe your great-grandparents had their first date down at the opera house? You never know what significance popular attractions had for your ancestors, but maps like this can give you a sense for the city’s culture and history. Indeed, the United Nations Charter was signed in the unassuming Veterans Building at the corner of Fulton Street and Van Ness Avenue.

To learn more about how your ancestors’ community and how they lived in it, check out The Family Tree Historical Atlas of American Cities, which contains maps of America’s 16 most historically important metropolises (including San Francisco), complete with timelines and citation information.

Did your ancestors leave their hearts in San Francisco? Learn how to trace them in our genealogy guide to research…