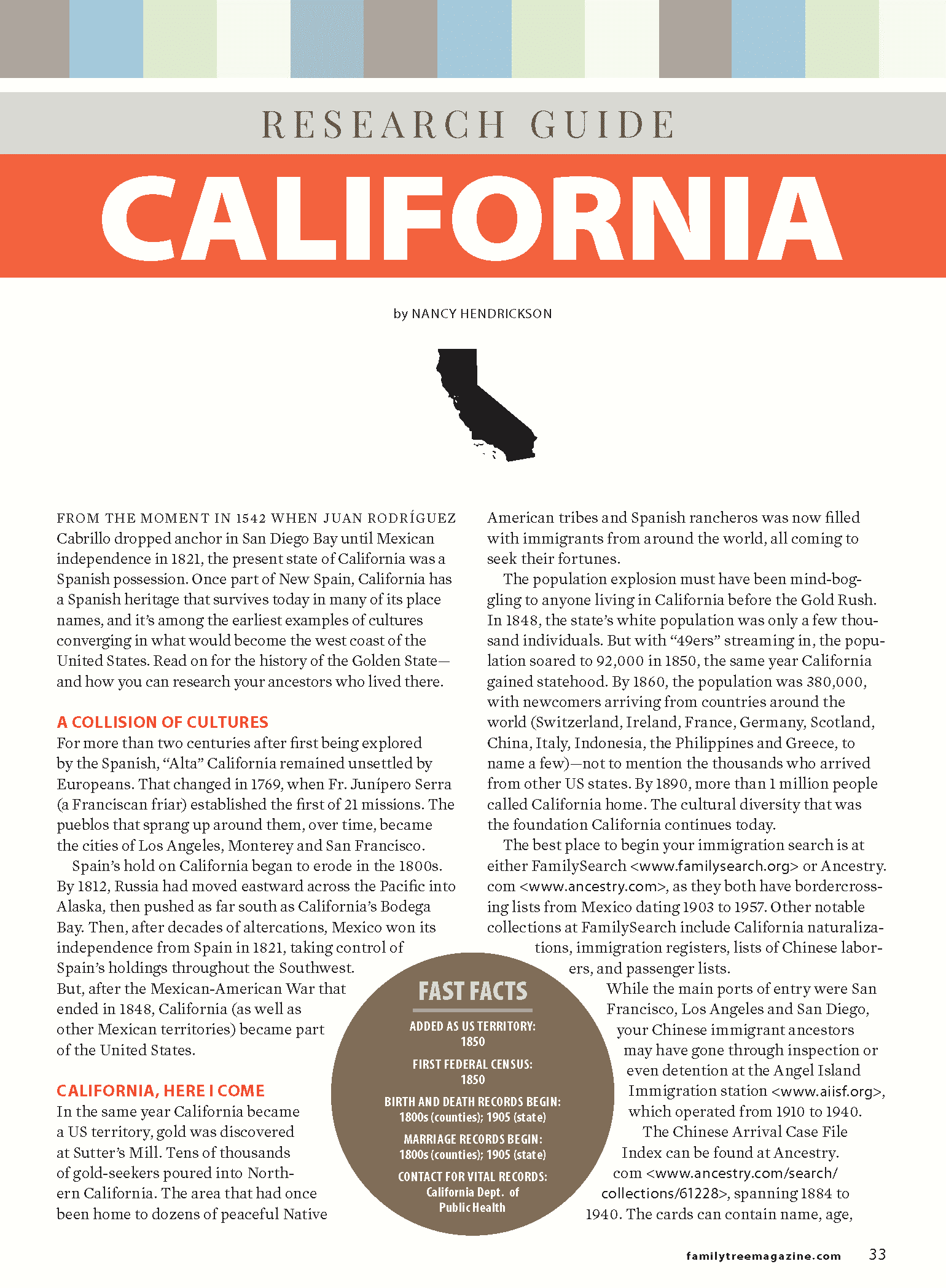 Your guide to California research!

By Lisa Louise Cooke Premium
It’s easy to understand why Tony Bennett crooned “I Left My Heart in San Francisco.” The City by the Bay has mesmerized visitors ever since it burst onto the American scene during the California Gold Rush of 1849. By the time the city incorporated in 1850, its population had exploded from 1,000 to more than 25,000. And as a key West Coast point of entry for immigrants, San Francisco has always valued its rich history, even when disasters have obliterated traditional genealogical records. This guide will help you reconstruct your San Francisco roots.

As the founding fathers were forming the United States of America in 1776, Spain was making its claim on San Francisco. A year after Gaspar de Portola’s expedition to northern California, Spain established the Presidio army base and the Mission San Francisco de Asis.
The area became part of Mexico in 1821, and the mission system gave way to land privatization. Englishman William A. Richardson established the first homestead, and together with Alcalde Francisco de Haro, laid out the street plan for what was then known as Yerba Buena. The United States claimed California in 1846 during the Mexican-American War, and by January 1847, Yerba Buena was renamed San Francisco.
San Francisco challenged pioneers with its hilly terrain and therefore remained fairly small despite its desirable port. All that changed in 1849, after East Coast newspapers reported a gold strike the year before. New arrivals poured into San Francisco, many making their fortunes supplying miners rather than digging for gold. California quickly became a state, and the United States secured its acquisition by fortifying San Francisco Bay at Fort Point and on Alcatraz Island.

You can sum up the key to San Francisco genealogical research in one word: earthquake. The famous 1906 temblor forever changed the landscape of records availability. Although the shaking did considerable damage, the following fires destroyed even more official records. The good news is that genealogists have pulled together to reconstruct the lost history with substitute resources, a huge number of which are available online. Whether your family lived in San Francisco before, during or after the quake, look to the following sources.
Vital Records: Birth, death and marriage certificates were hardest hit by the fires in 1906. The SFGenealogy website publishes pre-1906 newspaper notices you can use as substitute sources (click San Francisco County, then Databases).
Original birth and death records back to 1906 have been moved to the Office of the County Clerk, where informational copies are unrestricted. Order marriage certificates starting in 1906 from the San Francisco County Assessor-­Recorder. On FamilySearch.org, you’ll find San Francisco funeral home records and a large collection of post 1906-digitized marriage records (in “California, San Francisco County Records, 1824-1997”).
Newspapers: When it comes to filling in gaps left by the earthquake, newspapers rise heroically from the ashes. In addition to the birth, marriage and death notices at SFGenealogy, the Library of Congress’ free Chronicling America site offers digitized and searchable pages from local papers, including the San Francisco Call. The free California Digital Newspaper Collection includes the Call, Pacific Rural Press (1871-1922), Wide West (Sept. 30, 1854-Jan. 1, 1858) and Daily Alta California (Dec. 10, 1849-June 2, 1891). At the Sutro Library in San Francisco, you can access the San Francisco Chronicle (1913-1980) and the San Francisco Examiner (1913-1928). The Family History Library (FHL) has a San Francisco Newspaper Index (1904-1949) on microfiche;  rent it through your local FamilySearch Center.
Cemeteries: The city opened its first public cemetery, the Yerba Buena Cemetery, in 1850. Its primary cemeteries were the Presidio (also called San Francisco National Cemetery), established in 1884, and City Cemetery (also known as Golden Gate Cemetery, which included a potter’s field).
By the early 1900s, the growing city had moved most cemeteries to the south, primarily to Colma. You’ll find a wealth of information about San Francisco cemeteries here. Get details on the city’s old graveyards and where remains were reinterred at the San Francisco Cemeteries website.
City directories: Start your city directories research with San Francisco City, Social & Phone Directories, where you’ll find links to online directories. Compilations date as far back as 1776, and a large number cover 1850 through 1982. You also can find a number of original directories at the California State Library in Sacramento.

Census: US censuses of California start in 1850. Although that census doesn’t include San Francisco, a special state census taken in 1852 does cover the City by the Bay. You’ll find it on subscription site Ancestry.com; an index is at FamilySearch.org. You’ll also find the transcription of an 1842 San Francisco census—part of a court deposition—.

Pioneer biographies: For early California arrivals, don’t miss the searchable online indexes to several histories and biographical collections covering San Francisco. And California’s USGenWeb Project site offers transcribed San Francisco County biographies.
Land Records: In its collection of local land records, the FHL has the microfilmed McEnerney court actions (including an index to plaintiffs) to establish land ownership after the 1906 earthquake. To see additional resources at the FHL, run a place search of the online catalog on San Francisco and click the Land and Property heading.
At the SFGenealogy website, you’ll find links to digitized county land records such as San Francisco land titles (1839-1852), real estate transfer lists from 1876 and 1895, an index to federal land records for California and more. The San Francisco county records on FamilySearch.org also include deeds.
The free Internet Archive has digitized Real Estate Block books by Handy (1894, 1901, 1906, 1907 and 1909-1910, six volumes), and Mery (1909). And at the David Rumsey Map Collection, search a wide array of free digitized historic San Francisco maps, including Sanborn fire-insurance maps for 1905.

Immigration: The Angel Island Immigration Station in San Francisco Bay was a major port of entry for immigrants from Asia and Central and South America. Under the restrictive immigration laws at the time, nearly 250,000 were subjects of federal investigations. Search a partial index for case numbers and access files at the National Archives and Records Administration (NARA) Pacific Region Branch in San Bruno, Calif. Search for passenger lists at Ancestry.com.

1. Alcatraz Island
Access from Pier 33, San Francisco, CA, (415) 981-7625
Get a close-up look at the infamous federal penitentiary and the site of the first lighthouse and US-built fort on the West Coast.

4. Chinatown
Main entrance on Grant Avenue at Bush Street, San Francisco, CA 94108
From the 1850s to the 1900s, Chinatown welcomed immigrants from the Guangdong province of southern China. Today, the neighborhood is a city within a city full of shops and restaurants, attracting more annual visitors than the Golden Gate Bridge.

5. Golden Gate National Recreation Area
US Highway 101, (415) 455-2000
The jewel of this park, which encompasses the historic Presidio, is the famous Golden Gate Bridge. You can drive or walk across the structure, declared a Modern Wonder of the World by the American Society of Civil Engineers.

San Francisco Records at a Glance

Birth Records
Begin: 1905; surviving documents available from April 1906
Research tips: Request informational certificates from the Office of the County Clerk in person or by mail. Use newspapers and the resources linked here to substitute for missing records.

From the July/August 2012 Family Tree Magazine