Though native peoples came to Idaho as long as 14,000 years ago, it wasn’t until after the Louisiana Purchase in 1803 that Europeans and Americans to explored the area, beginning with Lewis and Clark in 1805. Fur traders dominated the early 19th century, establishing Fort Henry — the first American fur-trading post west of the Rockies — in 1810. Henry H. Spalding planted Idaho’s first potatoes in 1836, though agriculture wouldn’t be the leading industry until after 1900.

Pioneers began crossing Idaho on the Oregon Trail in 1843 and then, with the 1849 gold rush, on the California Trail. After Idaho’s mineral riches were discovered in 1860, people started coming to stay. Mining took over as the largest industry and in 1863, Idaho became a territory. The Idaho Territory included all of today’s Montana and most of Wyoming.

Native tribes — including the Shoshone, Snake, Nez Perce, Bannock and Sheepeater — resisted white settlement, sparking a series of wars from 1863 to 1879. Defeated, the tribes were eventually relocated to reservations. If you have native roots here, records of Idaho’s various Indian agencies and schools are available at the state historical society and the National Archives’ Pacific-Alaska regional facility in Seattle, as well as on Family History Library (FHL) microfilm.

Idaho had an unusually long road to statehood, finally joining the union in 1890. Its post-statehood settlement was fueled in part by silver mining — the Coeur d’Alene mining district, first tapped in 1884, became the nation’s richest source of silver — and by timber, with the United States’ largest sawmill opening in Potlatch in 1906. Today Idaho is again enjoying a population boom. A new rush of migration from disenchanted Californians and others attracted to its low-key lifestyle and natural beauty has made Idaho one of the fastest-growing states. 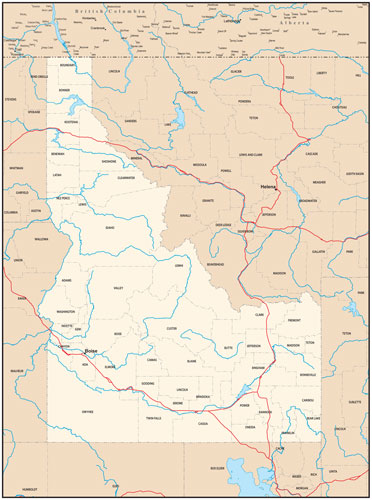 Return to the main Idaho page

Find contact information for archives, libraries and other genealogical organizations in Idaho.

Our county-by-county listing of Idaho has contact information and dates vital records for historic and modern-day counties.

These sites give you a peek into the lives of your Idaho ancestors.