The land on which Chicago’s glittering Michigan Avenue stands was a quiet wilderness 300 years ago. Illinois’ non-Indian beginnings were along the state’s southern waterways. In 1699, French priests founded a mission at Cahokia, in what is now St. Clair County. In 1703, the French also founded Kaskaskia, now in Randolph County; it eventually became the British seat of government. In 1763, France ceded the area to the British after the French and Indian War.

In 1778, the longtime home of the Winnebago, Miami, Illinois, Kickapoo, Pottawatomie, Fox and Sac Indians became part of the United States. Illinois became a county of Virginia after Americans captured Kaskaskia from the British. Virginia relinquished its claim in 1784, and three years later, Congress made Illinois part of the Northwest Territory. In 1800, Illinois became part of Indiana Territory. Illinois Territory was formed from it in 1809. Settlers were primarily from Virginia, Tennessee, Kentucky, and the Carolinas by way of the Ohio River. In 1818 Illinois became the 21st state. Most of the population lived near the state’s southern waterways.

The Black Hawk War of 1832 saw the Sauk and Fox Indians driven from the state and the last remaining Indian lands relinquished. Migration to Illinois during the 1830s was largely from New York and New England via the National Road or the Erie Canal to the Great Lakes. In the 1840s, that migration continued, and large numbers of German and Irish also began to arrive. While many soon moved farther west, many remained in Illinois. So did many of the Poles, Italians, Austrians, Hungarians, Russians, and Scandinavians who arrived after the Civil War. More than a quarter-million Illinois troops served the Union during the Civil War.

In the decades after the Civil War, Illinois and the rapidly growing Chicago area drew many African-Americans. Newcomers from around the world continued to migrate to Illinois throughout the 20th century. 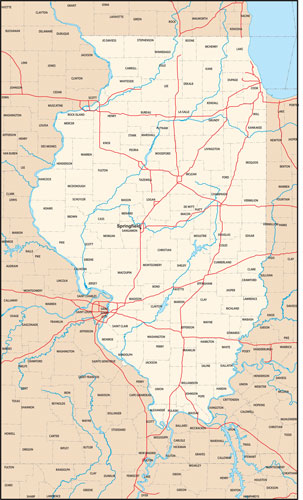 Return to the main Illinois page

Nicknamed the Windy City, Second City and City of the Big Shoulders, Chicago also has been called the "most American…

Find contact information for archives, libraries and other genealogical organizations in Illinois.