Louisiana’s history is a mix of American Indian, Spanish, French, German, English and African cultures. Although Spaniards reached the area in 1541, the earliest European claim came from French explorers at the mouth of the Mississippi River in 1682, and settlements at Biloxi (1699), Natchitoches (1714) and New Orleans (1718). France ceded to Spain its vast land west of the Mississippi plus New Orleans in a secret treaty in 1762. French territory east of the Mississippi River, except for New Orleans, went to Britain at the end of the Seven Years War in 1763. Descendants of European and African colonists, called Creoles, still live in the region. Acadians, exiles from French Canada and ancestors of today’s Cajuns, settled in southern Louisiana in the mid-1700s. Other 18th-century European immigrants included Palatinate Germans and Canary Islanders.

President Jefferson sent envoys to try to buy New Orleans, a port of growing commercial importance. Instead, the United States bought the entire territory of Louisiana in 1803. After several years as Orleans Territory, the southern portion of this Louisiana Purchase became the 18th state — Louisiana — in 1812.

Agriculture using slave labor dominated the early economy, from coastal sugar cane and rice plantations to cotton farms and plantations throughout most of the rest of the state. By 1860, the state’s 708,000 people included about 47 percent slaves. Of the free inhabitants, about 11 percent were foreign-born and just over 2 percent were free blacks.

Louisiana seceded in January 1861, and numerous Civil War engagements took place on its soil. After winning New Orleans and Baton Rouge, the Union controlled the eastern portion of the state. Louisiana was readmitted to the Union in 1868. After the Civil War, farm labor was largely comprised of tenant farmers and sharecroppers. Urban Louisiana grew during the early 20th century and by 1950, was almost 55 percent of the state’s population. Especially after World War II, petrochemical, timber, fishing, and related industries became major economic factors, along with food processing based on agricultural diversity. But cotton, sugar cane and rice farming, as well as the related manufacturing, remained important cornerstones in the state’s economy. The port of New Orleans has been a significant commercial and immigration center for more than 200 years. 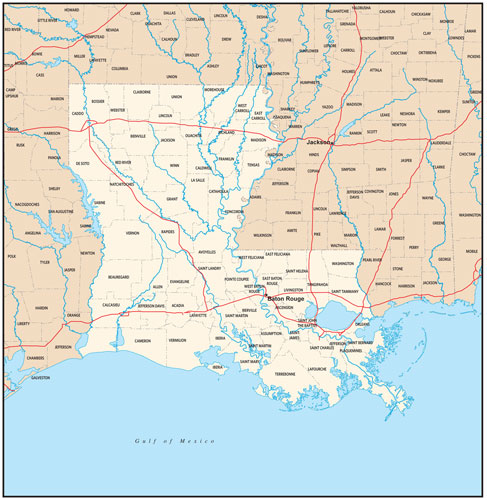 Return to the main Louisiana page

Learn about the dramatic conclusion of the War of 1812 with this Battle of New Orleans map.

Have family history in New Orleans? From fast facts to key resource, here's your guide to finding relatives in the…

Find contact information for archives, libraries and other genealogical organizations in Louisiana.