Spanish mariners, Sir Francis Drake, and, two centuries later, Captain James Cook and Russian fur traders all had eyes for Oregon in its earliest history. The arrival of the first American, Robert Gray, in 1792 set off a 54-year tussle with the British over Oregon. Lewis and Clark came in 1805, soon followed by agents of John Jacob Astor’s fur company, who in 1811 founded Astoria, the first permanent American settlement on the Pacific Coast. Dr. John McLoughlin of the Hudson’s Bay Company established Willamette Falls, later renamed Oregon City, in 1829. The same year, missionaries began to encourage farmers from the Mississippi, Missouri and Ohio River valleys to move to Oregon. That trickle became a flood with the wagon trains of the Oregon Trail starting in 1842: 53,000 newcomers arrived between 1840 and 1860.

The boundary disputes with the British were finally settled in 1846. Oregon Territory was established in 1848, partly in response to the massacre of settlers by Indians. The territory originally included everything west of the Rockies and north of the 42nd parallel, but a separate Washington Territory was carved out in 1853. Oregon became a state in 1859.

Gold strikes, railroads, farming and ranching, and then logging drove subsequent waves of settlement. Chinese came to work the mines and the railroads. In the 1870s, Scandinavians began to arrive, with many Finns settling in Astoria. Swiss immigrants to Tillamook began the state’s cheese industry. Basques settled in southeast Oregon in the late 1800s and early 1900s.

By 1880, Indian uprisings had been quelled and the state’s tribes — including the Chinookan, Shahaptian, Athapascan, Molala, Klamath, Umpqua, Kalapooian, Salishan, Kusan, Yakonan, Modoc and Northern Paiutes — were exiled to reservations in Oregon, Washington, and as far away as Oklahoma. If you have Native American roots in Oregon, seek records of Indian agencies and the Chemawa Indian School. 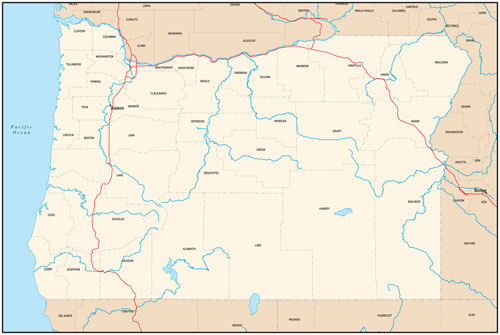 Return to the main Oregon page

If your ancestors transplanted themselves to Portland, it's not difficult to find out more about them in one of America's…

Find contact information for archives, libraries and other genealogical organizations in Oregon.

Our county-by-county listing of Oregon has contact information and dates vital records for historic and modern-day counties.