HISTORICAL OVERVIEW
Rhode Island is a small state with a long name — State of Rhode Island and Providence Plantations. The original four towns were clustered around Narragansett Bay. Roger Williams, a minister banished from Massachusetts Bay, established Providence. Another religious free thinker, Samuel Gorton, founded Warwick; Anne Hutchinson’s followers settled in Portsmouth; and Thomas Coddington’s devotees populated Newport. The colony became a haven for those seeking freedom to worship, attracting Baptists, French Huguenots and Calvinists, Jews and Quakers. King Philip’s War of 1675 to 1676 devastated the colony and local Native Americans. At war’s end, only a small tribe remained in what is now Charlestown. Both Massachusetts and Connecticut claimed ownership of parts of the colony in the 17th century.

In the 18th century, the close proximity of Narragansett Bay enabled Rhode Island traders to lead the Colonies in imports and exports. Many Rhode Island families today have connections in the West Indies due to the colony’s prominence in the Triangle Trade of slaves, rum and sugar. Many inhabitants of coastal areas participated in whaling and fishing.

The American Industrial Revolution began with Samuel Slater, an English immigrant who built the first US factory for manufacturing cotton thread. Textile manufacturing attracted immigrants to towns such as Slatersville in waves — Irish, Scots, French-Canadians and Italians. Germans found employment in the jewelry and silver trades.

As the factories left, Rhode Islanders turned their coastline into a playground for the rich and famous. Today, tourism attracts visitors from all over the world. 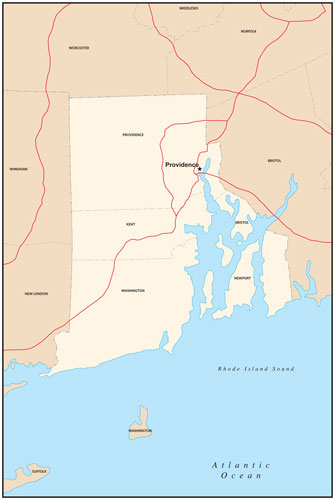 Find contact information for archives, libraries and other genealogical organizations in Rhode Island.

Our county-by-county listing of Rhode Island has contact information and dates vital records for historic and modern-day counties.

Learn more about the Ocean State.