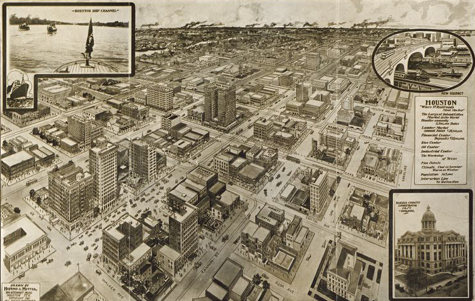 Image courtesy the Library of Congress.

The Atlanta Falcons and New England Patriots clashed yesterday in Houston for the 51st iteration of “the Big Game.” But long before the bright lights of NRG Stadium (where the game was played), the city of Houston exploded in size and population on its way to becoming the fourth-largest city by population. In 1910, Houston had a population of roughly 79,000; that population would nearly double by 1920, then double again by 1930.

This map of downtown Houston in 1912 is titled “Houston—a modern city,” and it hints at the city’s rapid and continuing expansion. Streetcars criss-cross over each other as people line the streets. The map’s key brags that Houston is “where 17 railroads meet the sea” and that the city’s population is 105,000—25,000 more than than it was during the census two years prior.

With its birds-eye view of the city, the map provides incredible detail of this twenty or so square blocks. In addition to street labels, the map also has labels for prominent buildings and select businesses, such as the Rice Hotel (the site of the former Republic of Texas’ capitol building) and the first headquarters for the Houston Chronicle.

City maps like this one can provide similar information about the places your ancestors lived. The Library of Congress has an impressive collection of city maps from across the world as well as a collection of panoramic maps of US cities. State and regional archives often hold similar maps for local regions, and these can be especially helpful if your ancestors lived in a small town.

This past weekend I was the featured speaker for the Austin Genealogical Society. There were a lot of folks in…

Learn about Texas's history and available records in this research guide that includes a map and bibliography.

Find contact information for archives, libraries and other genealogical organizations in Texas.