HISTORICAL OVERVIEW
16th-century Spaniards exploring Texas found indigenous people, but not the gold they sought. Later Spanish missions, presidios and villages were the nuclei for modern cities, including El Paso (1682), San Antonio (1718), and Nacogdoches (1779)—the latter well situated for trade with the Indians and with Natchitoches, La. French settlement on the Texas Gulf coast in 1685 was short-lived. When France ceded greater Louisiana to Spain in 1762, Texas and Louisiana were under the same crown. In 1803, the United States tried to claim Texas as part of the Louisiana Purchase.

Anglo-American settlement had not begun when Mexico gained independence from Spain in 1821. Under a renegotiated Mexican contract, Stephen F. Austin recruited several hundred families to settle river valleys near his San Felipe de Austin headquarters. Other empresarios also settled the Mexican State of Coahuila and Texas. Newcomers had to swear allegiance to Mexico and Catholicism.

Adventurers and would-be land speculators became disgruntled by the centralist Mexican government and its 1830 attempt to halt Anglo-American settlement. Many colonists were alarmed by Mexican preparations to send an army to occupy Texas. After several battles, Texans declared themselves an independent republic on March 2, 1836. The war for independence was short. The Republic of Texas existed for nine years before the US Congress annexed it in late 1845, accepting Texas as the 28th state. After a war with Mexico from 1846 to 1848, Mexico relinquished its claim to Texas and the United States gained most of its Southwest.

Early settlers arrived largely from Alabama, Mississippi, Tennessee, Arkansas, Georgia, Louisiana and Missouri, as well as other US states, Mexico, the British Isles and German states. Czechs, Scandinavians, and Alsatians began arriving in the 1840s; Poles, in the 1850s. Most early settlers were small farmers, but cotton planters with slaves also moved in. By 1860, Texas had about 604,000 residents, of whom 30 percent were slaves, 7 percent were foreign-born immigrants, and only about 350 were free blacks. Not counted in censuses were numerous Indians, many of whom were eventually relocated to Indian Territory reservations.

Although divided over the issues of slavery and secession, Texas seceded from the United States in February 1861. The state saw limited military action during the Civil War and was readmitted to the Union in 1870.

From the 1820s to the early 1900s, cotton was the money crop and corn sustained life. After the Civil War, cotton, railroads, and cattle and sheep industries expanded rapidly. The 20th century saw economic diversification in agriculture and development of the petrochemical, timber-related, food-processing and other industries. 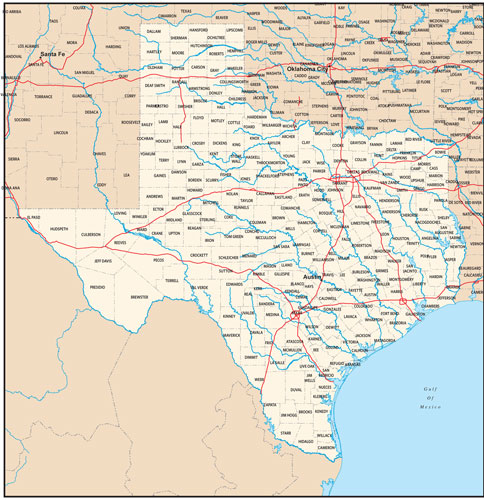 Return to the main Texas page

Take a step back in time with this antique map of Houston, the U.S.'s fourth-most-populated city.

This past weekend I was the featured speaker for the Austin Genealogical Society. There were a lot of folks in…

Find contact information for archives, libraries and other genealogical organizations in Texas.