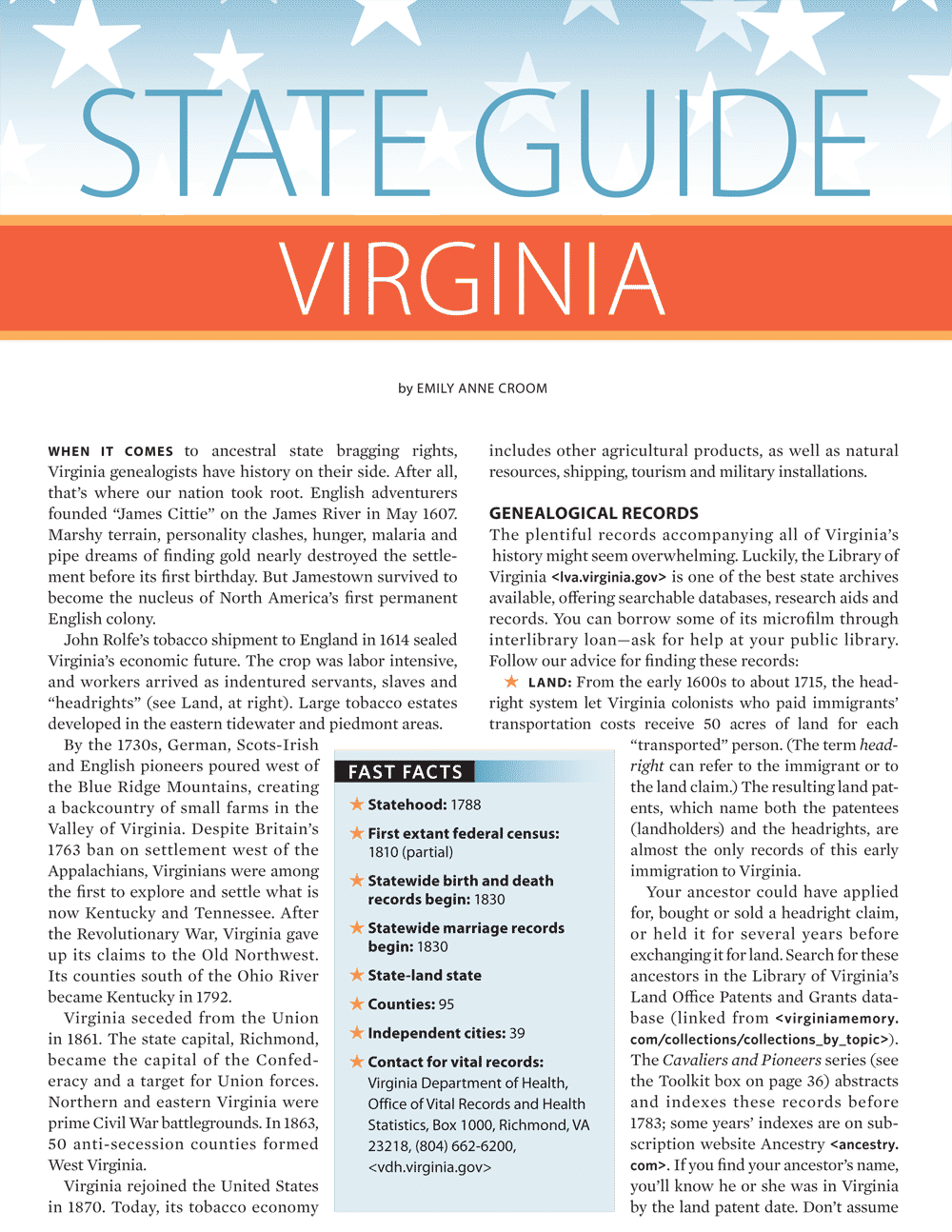 Your guide to Virginia research!

Though Virginia census enumerations were taken in 1790 and 1800, the records have not survived. Part of the 1810 census does exist. This makes it necessary to turn your attention to census alternatives, including Virginia tax lists from 1782 through 1785. Tax lists hold a wealth of information; they include the tithables and quitrents described above. For pre-1783 tax records, see Virginia Tax Records: From the Virginia Magazine of History and Biography, The William and Mary College Quarterly, and Tyler’s Quarterly (Genealogical Publishing Co., 1983).

Researching Virginia court records is a maze of county courts, orphans’ court, courts of claim, quarter courts, general courts, a supreme court of appeals, a high court of chancery, a superior court of chancery, district courts, circuit superior courts of law and chancery and circuit courts. Some courts overlap; others replaced earlier courts. To get more information about the different courts and their jurisdictions, refer to A Preliminary Guide to Pre-1904 County Records in the Archives Branch, Virginia State Library and Archives by Suzanne Smith Ray, Lyndon H. Hart III and J. Christian Kolbe (Virginia State Library and Archives, 1987).

Virginia began registration of births and deaths early on, requiring counties to register these records beginning in 1853. This continued until 1896, but there is a gap during the Civil War, when most counties abandoned registration. You will find another gap in the records from 1896 until statewide registration began in 1912. Just a few independent cities kept birth and death records during this time.

Before 1853, marriages were handled by posting a bond — a written agreement to forfeit an amount of money should the marriage not take place — or banns, which were announced at three church meetings prior to the ceremony. Banns, therefore, are found in church records rather than county courthouse records.

Since 1853, state law has required counties and independent cities to issue marriage licenses. The application for marriage, which was formalized in 1858, asks for full names, ages, places of birth and residence, proposed marriage date and place, whether divorced or widowed, parents’ names, groom’s occupation and minister’s name. When the officiant gave the license to the state, the clerk was required to enter the marriage in a marriage register. The Division of Vital Records has this marriage register, which dates from January 1853. The clerk of the county or city court has copies of all marriage records kept by that court. The Library of Virginia http://www.lva.virginia.gov has many marriage records. The Family History Library has microfilmed copies of marriage bonds and marriage registers up until about 1935.

Return to the main Virginia page

I've always been told that my ancestor worked at the "Richmond Ironworks" during the Civil War. But his son was…

Learn about Virginia's history and available records in this research guide that includes a map and bibliography.

Find contact information for archives, libraries and other genealogical organizations in Virginia.