The first recorded experience of an American in Wyoming was not encouraging to future settlement. In 1807, John Colter, a fur trapper, mountain man, and Lewis and Clark expedition veteran, chanced upon an area of geysers where the earth itself seemed to bubble. He dubbed it “Colter’s Hell.” Nonetheless, other intrepid explorers followed. For decades, Wyoming was primarily a site of fur-trade rendezvous and a way-station en route to Astoria, Ore. Fort Laramie, the first permanent trading post, was founded in 1834. Mormons established Fort Supply, the first farming settlement, in 1853.

Native Americans were already here, of course. Wyoming’s most prominent tribes are the Eastern Shoshone and Northern Arapaho, who were moved onto the Wind River Reservation in 1868 and 1877, respectively. (The Southern Arapaho and Southern Cheyenne were removed to Oklahoma.)

Immigrants came to Wyoming in waves, especially following the 1868 creation of Wyoming Territory (carved largely from Dakota Territory). Chinese laborers worked on the Union Pacific Railroad, whose progress across the state from 1867 to 1869 created the towns of Cheyenne, Evanston, Green River, Laramie, Rawlins and Rock Springs. Many Irish also came to work on the railroad. They and others from the British Isles accounted for half of Wyoming’s foreign-born population in 1870. English arrivals were often Mormon converts.

Another early visitor to northwest Wyoming was “Buffalo Bill” Cody. He guided tours through the Yellowstone area, which became America’s first national park in 1872.

Wyoming became the 44th state in 1890. In 1925 it made history by electing America’s first woman governor, Nellie Tayloe Ross, continuing a tradition of Wyoming milestones for women begun with the first equal-suffrage vote. 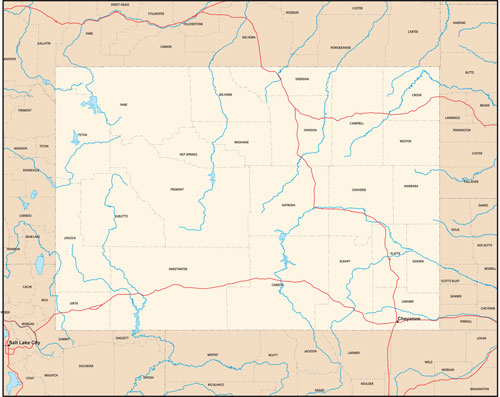 Return to the main Wyoming page

Find contact information for archives, libraries and other genealogical organizations in Wyoming.

Our county-by-county listing of Wyoming has contact information and dates vital records for historic and modern-day counties.

The Wyoming State Library has posted the first set of historical Wyoming newspapers from the Wyoming Newspaper Project. This project…