The holidays not only provide an opportunity to reconnect with family members, but your family’s heritage as well. Practicing long-held traditions is a great way to celebrate the season and the ancestors who passed those traditions on.

The many Americans with German ancestry are in luck: many of our common American Christmas traditions have deep German roots.

Here are a few authentic holiday traditions (and one not-so-authentic) to celebrate the season and your family’s German heritage.

The weihnachtsgurke or “Christmas pickle” is a holiday tradition for many Americans who have German heritage. A pickle-shaped Christmas ornament is hidden somewhere on the Christmas tree, and whoever finds it is said to have good luck in the new year.

Although many Americans believe this to be an old German tradition, a 2016 poll found that over 90 percent of native Germans had never heard of this particular pickle practice!

St. Nicholas Day is celebrated on December 6 around the world. It began as the feast day of Saint Nickolas of Myra, a 4th-century bishop with a habit of secret gift-giving who laid the foundation for our modern Santa Claus. In Germany, St. Nicholas is still portrayed as a kindly bishop and is a separate character from Weihnachtsmann, or Father Christmas.

On St. Nicholas Day, German children leave their shoes out overnight in hopes that St. Nick will stop by and fill them with treats (if they’ve been good, of course). In some traditions, St. Nick is accompanied by a character known as Knecht Ruprecht, who brings badly-behaved children lumps of coal.

While pickle-shaped ornaments may be more of an American practice, the Germans have a proud tradition of creating glass-blown ornaments to adorn their Christmas trees. The German town of Lauscha has produced hand-blown Christmas ornaments for centuries (even the town’s coat of arms includes a Christmas tree!

Lebkuchen is traditional German gingerbread made with honey and a variety of spices (including ginger). The Bavarian city of Nuremberg has produced Lebkuchen for centuries, and in 1996 the city was made a protected designation of origin (PDO), meaning that Nuremberg Lebkuchen can only be produced within its borders.

Lebkuchen is sold at traditional German Christmas markets (more on this below). It is often heart-shaped and decorated with sweet icing messages.

The Germans are also credited with inventing gingerbread houses in the 16th century. Whether the cookie-houses were invented before the fairytale of Hansel and Gretel or the other way around isn’t certain. Regardless, gingerbread houses have endured as a beloved Christmastime tradition.

Stollen is another traditional Christmas recipe with deep German roots. Sometimes called Weihnachtsstollen or Christstollen, this sweet bread is made with fruits, nuts, spices and occasionally marzipan.

Stollen comes from the town of Dresden in the German state of Saxony. According to the official Dresden stollen website, the first recorded mention of this sweet bread was in 1474 on a hospital bill! Today, Dresden is home to the annual Stollenfest and is a protected destination of origin for stollen.

Advent calendars are a popular Christmas tradition in many areas of the world. While there are many different kinds of advent calendars, they all follow the same basic form: a calendar beginning on December 1 containing a small prize or gift for each day until Christmas (24 total).

The first advent calendars appeared in Germany in the early 20th century. Their inventor was a man named Gerhard Lang, who claimed his mother had made him a calendar when he was a boy by affixing 24 candies to a piece of cardboard. Gerhard Lang was one of the founders of the publishing company Reichhold & Lang which produced the first consumer advent calendars around 1908.

Outdoor Christmas markets or Christkindlemart originated in Germany and are now held all over Europe and the United States. Traditional crafts include handmade ornaments made of glass or wood, along with gold-foil angels, or Rauschgoldengel. Lebkuchen is often sold as well as Glühwein, a German take on mulled wine.

Another traditional element of a German market is the Christkindl, a traditional Christmas figure and gift-bringer who presides over the festivities. In many markets including the Nuremberg Christmas market, the title of Christkindl is given to a young woman in the community.

While many associate The Nutcracker with Russia, the story of Clara and her magical Nutcracker doll began as a German fairytale. German author and composer E.T. A. Hoffmann originally published the story in 1816 under the title The Nutcracker and the Mouse King. It wasn’t until 1892 that the Nutcracker ballet premiered in Russia.

You can preview Hoffmann’s original story on Google Books, but be warned: With seven-headed mouse kings and sinister mouse queens, the original is much darker than the sugary-sweet story we’ve come to know!

Looking for more ways to celebrate your heritage this holiday season? Check out these holiday traditions from around the world.

Why We Celebrate Oktoberfest in September 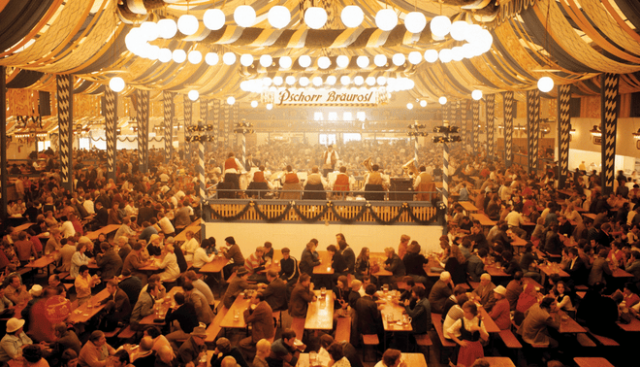 It’s a question that burns inside my brain this time every year: Why is Oktoberfest celebrated in September? Let’s find out!
Family Tree Magazine
How to Collect and Share Family Recipes, Plus Troubleshooting Tips
Use these tips to collect, preserve, and share your favorite family recipes for future generations.
Family Tree Magazine
Seven Ways to Preserve Family Traditions
Do you want to preserve your family history and traditions but you aren’t sure where to start? Here are a few suggestions and tools for how you can preserve traditions for years to come.
Family Tree Magazine