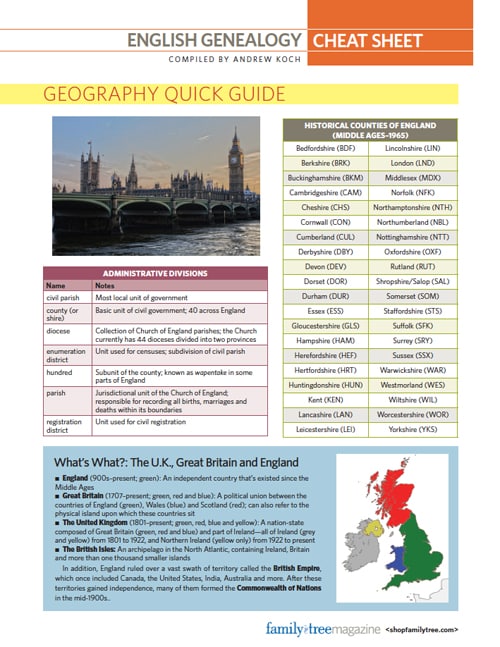 Find your English ancestors with the English Genealogy Cheat Sheet!

National census records naming UK residents, created every 10 years starting in 1841, give you a regular snapshot of your relatives in the United Kingdom. They place an individual or family in a location on a specific date, and can provide information such as names, relationships, place of birth, marital status and occupation. As for US censuses, the details recorded about each person increased over the years.

The good news is that images of census records for 1841 to 1911 are readily available online. These cover England, Wales, and the Crown dependencies of the Channel Islands and the Isle of Man (the UK countries of Scotland and Ireland participated in the censuses as well, but those countries’ records aren’t always in the same databases as English records, so we won’t cover them here). We’ll share when and how censuses were taken, their availability online, and some search strategies to help you find and understand the data on the images.

The United Kingdom has taken a census has every 10 years since 1801, with the exception of 1941, when World War II kept the government preoccupied. (The 1931 census also was destroyed during the war.) The House of Commons passed an act in December 1800 to organize the census, and the first census in England and Wales was taken the night of March 10, 1801. Parliament continued to enact legislation every 10 years from 1810 to 1910 to allow each census to be taken the next year. The Census Act of 1920 eliminated the decennial legislative requirement and provided for an enumeration at any time, so long as five years had elapsed since the last census.

The 1801 through 1831 censuses were conducted at the county level; the national government didn’t collect the returns. Overseers of the Poor, clergy, and other local officials served as enumerators. These censuses requested only the name of the householder, the number of families in the dwelling, and the numbers of males and females in the household. The records are therefore of limited genealogical value and in any case, most of the documents were lost or destroyed. Local county records offices may have some surviving pieces; some have been transcribed and published in books such as Pre-1841 Censuses & Population Listings in the British Isles by Colin R. Chapman (Genealogical Publishing).

The 1841 census was the first “modern” enumeration, organized and collected centrally under the office of the Registrar General. For the first time, the original materials were kept and stored. It also was the first census to list the names of every individual in each household or institution. The only information requested was name, age, gender, occupation, whether born in the parish where currently enumerated, or whether born in Scotland, Ireland or “foreign parts.”

It’s important to note the date an enumeration was conducted and how the information was gathered and processed. Enumerators were responsible for distributing census questionnaires before the official census date to every inhabited dwelling and institution. Instructions printed on the form helped the householder understand whom to include and how to enter the information. The householder was to complete the form and name every individual who would spend the night in that place, including travelers. People who were working or traveling during that night were supposed to be included on the schedule at the house where they usually returned in the morning or at the place where they would’ve stopped on that night. But some night workers and travelers were inevitably omitted because of confusion over the instructions.

The census was to be completed based on occupancy on the nights of the enumeration dates listed above. By comparing the age of a person from one census to the next, and taking into consideration the official census date, you may be able to note that a person’s birthdate falls between, for example, March 30 (the 1851 census) and June 6 (the 1841 census).

Immediately following census night, the enumerator revisited each dwelling to collect the completed forms. This might require multiple trips if no one was home. The enumerator also might help householders who were illiterate or who didn’t understand the instructions to complete the questionnaire. The enumerator arranged the collected forms in sequence for the district and copied the information into bound household enumeration books. Special enumeration books were prepared for hospitals, barracks, workhouses, orphanages, jails, prisons and other institutions. Beginning in 1851, special schedules covered sailing vessels.

It is these enumeration books that have been microfilmed, and later digitized, and whose images we consult today. The original 1841 through 1901 household books are deposited with the British national archives (TNA) in Kew, Richmond, Surrey, as are the 1911 household forms.

To help you understand the data recorded, refer to the extracts from enumerator instructions for the 1841 through 1901 censuses.

In 1841, for example, enumerators were supposed to round the ages of those 15 years and older down to the nearest five years. Directions for one age group, for instance, stated “For persons aged … 35 years and under 40 write 35.” The exact age was to be recorded for those younger than 15. You can see how this might be confusing in the 1841 census image shown on page 59.

Household schedules serve as the official records for the 1911 census; the enumerators didn’t copy the forms into household books that year. Instead, they created summary books listing every address, even unoccupied buildings, with the names of the heads-of-household and statistics. You can view these on Ancestry.com. This also was the first census to name military personnel overseas, some 135,000 soldiers on 288 bases and 36,000 naval personnel on 147 Royal Navy ships. Soldiers not on base on the night of April 2, 1911, were listed on the census schedule and marked absent. If a soldier was on leave in the British Isles, the census form should state whether he was in England, Wales, Scotland or Ireland. Naval crew on shore leave on the night of the census won’t be listed on the ship’s census return, since the instructions specify including only those on board.

Because the 1801 through 1831 censuses were never collected centrally, they were never microfilmed. TNA holds (and has microfilmed) the 1841 through 1901 census books and the 1911 household schedules. County record offices throughout the UK may also hold microfilm or microfiche copies of censuses for their respective areas.

Fortunately, you don’t have to fly overseas or order microfilm to find ancestors in these censuses. Digitized records are now on these familiar commercial genealogy websites, along with indexes you can search by name:

We’ll use Findmypast as an example. This site, based in the United Kingdom, provides comprehensive search facilities for UK censuses, along with complete online guidance to the content. If you don’t have a subscription, see if your library offers access or visit your nearest FamilySearch Center. Then follow one of these search strategies:

Each UK census database offers its own search options and indexes the records differently, so it’s worth searching another site when you can’t find an ancestor in the first one you try. Regardless of which website you use, read the available help and information about the census collections.

Here’s an example of how the site’s background information is important: Remember how the records for the 1911 census are the original forms each householder completed, not the household books that enumerators copied? If the householder wasn’t very literate, you can expect to find spelling errors, which were indexed in the online database as written. In addition, an individual’s hard-to-read penmanship may have led names to be indexed in unexpected ways.

Two columns of particular interest in the 1911 census might have clerks’ annotations of standardized key codes. Findmypast has lists of these codes, which can help you decipher the householder’s answer:

UK censuses are invaluable for locating and reconstructing British families and determining exact places of birth. These clues can point you to other records, such as civil registrations, church records, land transactions, taxes, newspaper articles and more. They also can help you trace migrations, occupations and other details to extend your understanding of your ancestors’ lives.

The 1921 UK Census: What It Is and When It Will Be Released

Discover what the soon-to-be-released 1921 UK census can teach you about your English and Welsh ancestors.