The Revealing History of Underwear

By David A. Fryxell Premium
Please enjoy this Plus article, made free temporarily.
According to the internet, October 13th is National No Bra Day in America. This is quite the leap from where women came from. November 3rd, 2014, marked the 100th anniversary of the brassiere patent. Mary Phelps Jacob, a New York socialite, had actually invented the bra by accident the year before, when her whalebone corset simply wouldn’t do under her sheer evening gown. 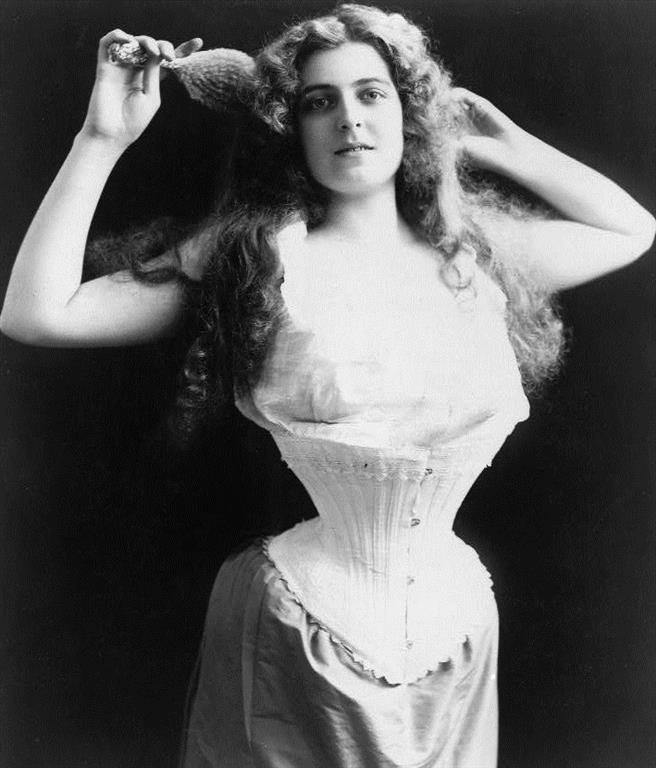 Woman Wearing Corset, Brushing Her Hair, Half-Length Portrait, Standing, Facing Front. ca. 1899. Image retrieved from the Library of Congress
Jacob employed a pair of silk handkerchiefs and some silk ribbon instead, and undergarment history was made. Although Jacob briefly manufactured her “Backless Brassiere” under the business name of Caresse Crosby, the appeal of being an undergarment mogul soon paled.

What’s a girl to do?

She sold her patent to the Warner Brothers Corset Co. in Connecticut for $1,500. Warner, which would develop the “alphabet” system for bra cup sizes (A, B, C, D) in 1935, made some $15 million from Jacob’s invention over the next 30 years. 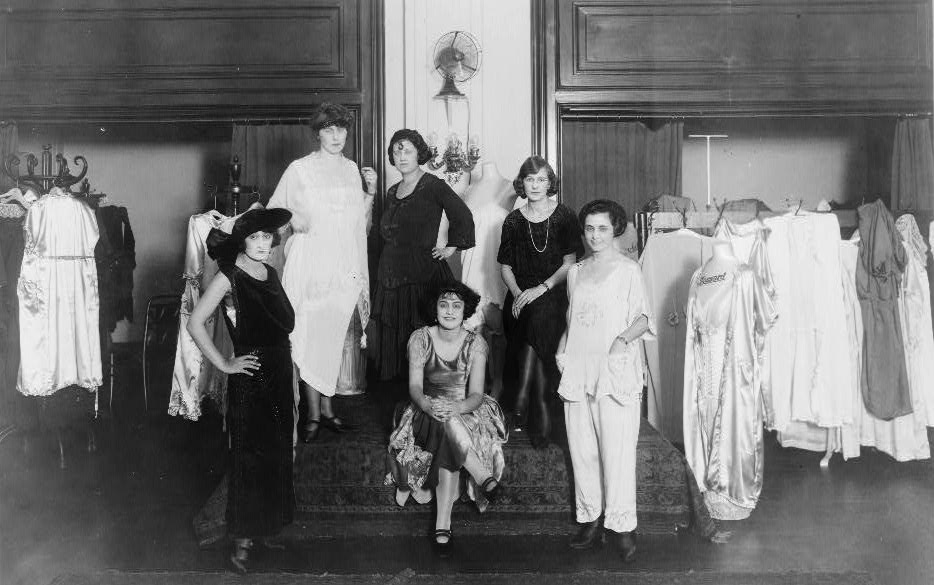 Fashion show at the Wells Shop, a store specializing in corsets, brassieres, hats, and bonnets, at 1331 G Street, N.W., Washington, D.C. 1921. Image retrieved from the Library of Congress.
Jacob was hardly the first underwear innovator motivated more by comfort and style than profit. What to wear under our clothes (or sometimes instead of clothes) has presented a challenge since the invention of clothes. The earliest underwear, the loincloth, was originally worn as outerwear in warm climates. 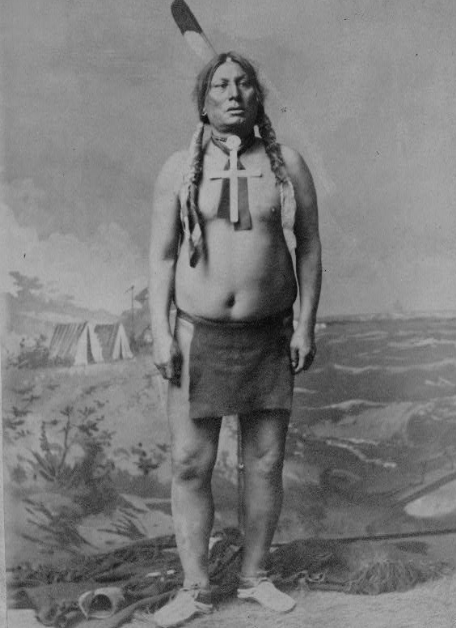 Hunkpapa chief, full-length portrait, standing, facing front, wearing loincloth, in front of painted backdrop. Retrieved from the Library of Congress.
Leather loincloths have been found dating back 7,000 years, and Egypt’s King Tut (1341 BCE to 1323 BCE) was buried with multiple linen loincloths. Men continued to wear loincloths in ancient Greece, though by Roman Empire times it had evolved to a shorts-like subligaculum.
Female athletes wore a short subligaculum plus an upper strophium, an outfit that would pass for a bikini on today’s beaches.

In the colder climes of northern Europe during the Middle Ages, people discovered the benefits of “layering” and underwear became less interchangeable with outerwear.
Men adopted a loose sort of trousers called braies, which were laced and tied around the waist and at mid-calf. Originated by Celtic and Germanic tribes, braies got covered by other clothes and worn as underwear in the Middle Ages. They became shorter as chausses—originally leg armor and later, woolen leggings—became longer.
Eventually, form-fitting hose took braies’ place. Given the complexity of getting into and lacing up a man’s braies, a buttoned or tied front flap was essential for answering the call of nature. This led to the codpiece, worn on the outside, which Henry VIII of England famously padded—leading to a 16th-century fad of ever-larger codpieces. 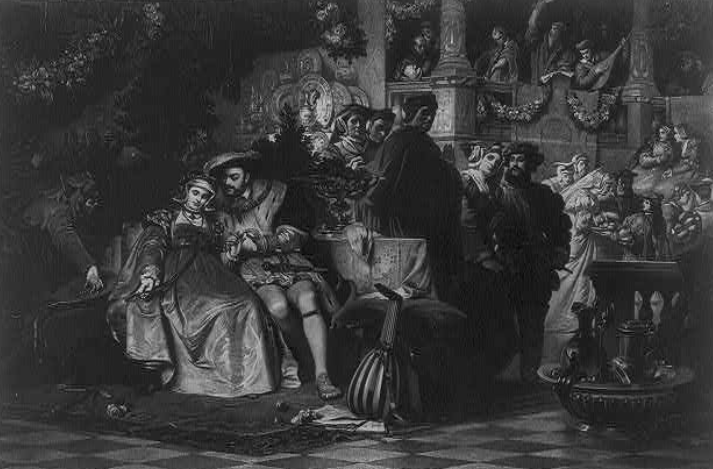 Henry VIII and Anne Boleyn at Cardinal Wolsey’s – from the original painting in the collection of Mr. John Wolfe, New York. Retrieved from the Library of Congress.

It wasn’t entirely vanity; codpieces also were handy as small pockets. Medieval men and women covered their upper bodies with a chemise (called a smock or shift in England), the forerunner of the modern shirt, which men tucked into their braies.

For women, the chemise became the innermost of an escalating layering of petticoats. The farthingale, introduced in the 16th century, added hoops to shape the skirts on top. Over that, a stiff linen underbodice called a cotte (later, a body), which had a “push-up” effect, evolved into an early form of the corset.
Simple cotton, flannel, linen or silk knee-length trousers known as drawers (because you “draw” them up) replaced men’s complicated braies and hose.
The inventions of the cotton gin and spinning jenny in the 18th century hastened and democratized this underwear evolution. For the first time, cotton underwear could be mass-produced in factories and sold in stores. 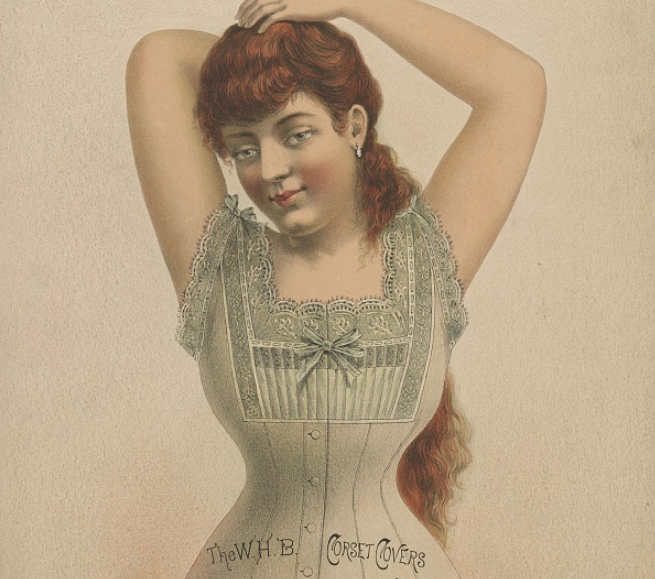 An ad for Wm. H. Burns & Co. manufacturer of corset covers and muslin underwear. Retrieved from Library of Congress.

The power of steel

For women in the 18th and 19th centuries, however, fashion trumped comfort. Stays, laced behind the back, forced an erect posture. 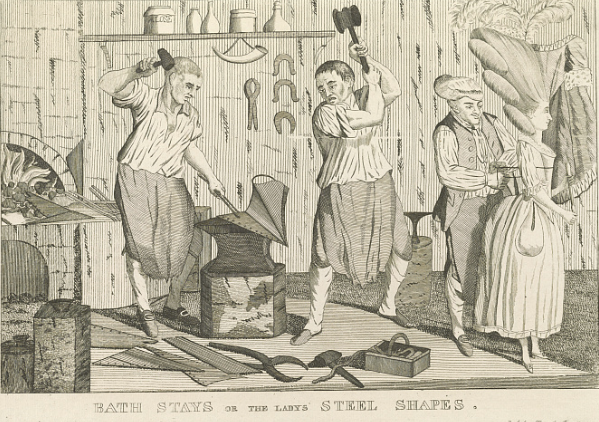 Image retrieved from the Library of Congress
When “wasp” waists became fashionable in the 1820s, stays turned into corsets—stiffened with steel or whalebone—that narrowed the waist, sometimes at the expense of internal organs. Atop the corset women wore a horde of pettitcoats, crinolines and often a bustle, popular in the 1880s as an enhancement to the shape of the buttocks.

Both women and men adopted the “emancipation union under flannel” or union suit, invented in 1868 in reaction to the constricting corsets of the day. The forerunner of long johns (possibly named after boxer John L. Sullivan), the union suit buttoned up the front and sported a convenient buttoned rear flap for trips to the outhouse.

Most of the late-19th and early-20th-century underwear innovations benefitted men. In 1874, C.F. Bennett invented the jockstrap to protect the nether regions of “bicycle jockeys” bouncing on cobblestone streets.

Guelph Elastic Hosiery of Ontario added the first hard cup in 1927. Happily, another jockstrap innovation, marketed in 1900 as the Heidelberg Electric Belt, failed to catch on; it administered a low voltage purported to cure impotence, insomnia and other ailments.

Long drawers and union suits lost popularity after World War I, during which soldiers got used to short underwear with a button-front “yoke.” Jacob Golomb, founder of the Everlast boxing-equipment company, invented boxer shorts—named for their origins in the trunks boxers wore—in 1925. He replaced the trunks’ leather belts with more flexible elastic waistbands.

But modern men’s underwear didn’t really take shape until a postcard from the French Riviera arrived in the mailbox of Arthur Kneibler, an executive at the Coopers underwear company in Wisconsin.
The postcard, depicting men wearing snug swimwear, inspired Kneibler to create men’s briefs. First sold at Chicago’s Marshall Fields department store on Jan. 19, 1935, and named the jockey (because they provided support previously found only in jockstraps), the briefs were a sensation. The company sold 30,000 in just three months and eventually renamed itself Jockey. 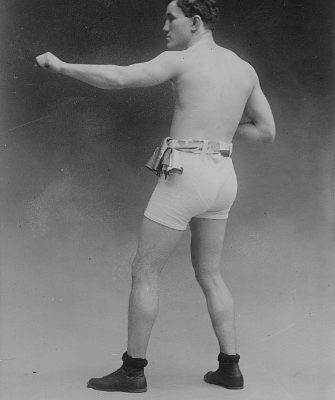 Tommy Murphy in athletic trunks. 1910. Image retrieved from the Library of Congress

In addition to ushering in more-comfortable men’s underwear, World War I helped free women from restrictive corsets with metal stays: The government discouraged women from buying them, which saved some 28,000 tons of metal for the war effort.
The new brassiere helped take up the slack. Other innovations soon followed: garter belts to hold up flappers’ stockings when they danced; girdles to replace the corset; latex panties, introduced in 1930; nylon stockings in 1940, when 64 million pairs were sold and manufacturers couldn’t keep up with demand (women had to resort to painted-on stockings or going bare after World War II cut off supplies of silk and nylon).
Pantyhose were invented in 1959—not surprisingly, many women would note, by a man, Allen Grant Sr. A man also gets the credit (or blame) for popularizing the thong.