By the time of the Civil War, photographic technology had developed to the point that many families possessed cherished photos of their soldiers and even card photos of famous generals. The shiny, reflective daguerreotype was waning in popularity. Glass ambrotypes were still widely available, but the most fashionable opted for more-durable tintypes (actually printed on iron plates) or cartes de visite paper prints. While the photographic industry flourished in northern states, blockades on southern ports prevented the importation of supplies. The price of photographs fluctuated during the war, with ambrotypes dipping as low as 25 cents and cartes de visite at a dollar. 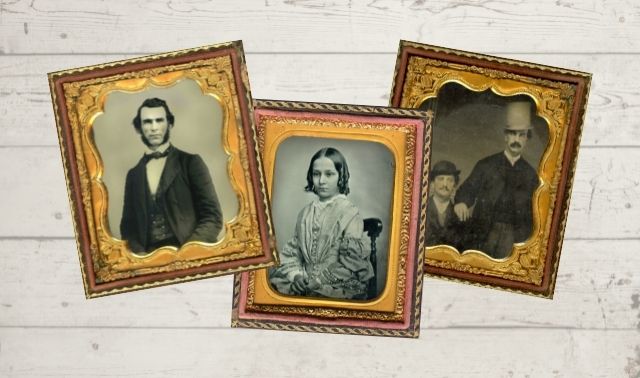 At a photo studio in the late 1850s, you could choose the style of portrait—daguerreotype, ambrotype, tintype or a paper card photo. So which is which?
Family Tree Magazine

If you’re lucky enough to have photos of your Civil War-era ancestors, there are a few strategies you can use to tease our more information about those pictured. We’ll cover a few of these strategies, then walk through a few examples of Civil War-era photos and the different clues revealed in the type of image, the case enclosing it (if any), the clothing your ancestors wore, and the props and backdrop around them. As you’ll see, the tiniest details can lead to new information. For now, let’s cover some basic strategies to apply to your Civil War-era photo research.

A quick way to date a Civil War picture might be on the back. The government taxed photographs from Aug. 1, 1864, to Aug. 1, 1866, so turn over your images to look for a tax stamp. Stamps were supposed to bear the photographer’s initials and a date, but many studios didn’t fully comply. A stamp’s value hints at the photo’s purchase price: A two-cent stamp was placed on images costing less than 25 cents. A three-cent stamp indicates the image cost 25 to 50 cents, and a five-cent stamp indicates a cost of 51 cents to $1. Six months before the law was repealed, the government added a one-cent stamp for photos worth less than a dime.

Despite the economically depressed war era, our ancestors observed fashion trends. The evidence is in family photographs from the period. Women gazed at the color fashion plates in magazines such as Godey’s Lady’s Book to follow the trends, and they created accessories from pocket­books to collars and shawls. Civilian men made a statement with caps and hats. Enlisted men and officers wore uniforms in a wide array of colors—not just blue and gray. Boys wore pants or, for the youngest ones, dresses, while girls wore styles imitating Mom.

Using Women’s Collars to Date Old Family Photos
The last two images blog reader Kimble DaCosta sent me are from the same period, but show off two different collar styles: one from the mid- to late 1870s and the other from the late 1870s to early 1880s. Both photos are tintypes. You can read the first two installments…
Family Tree Magazine

It’s all well and good to talk about strategies for photo research but why not see these strategies in action? Below we have nine examples of photographs from the Civil War era; take a look and see how the subtle details can lead to more information.

Tip: If you don’t know whether your image is a tintype, look for telltale rust spots. Still unsure? Test it: A magnet will stick to a tintype, which is actually made of iron.

Tip: A woman’s dark clothing or accessories in a Civil War-era photograph may indicate she’s mourning a deceased loved one. But because many colors resemble black in black-and-white photos, search for records as evidence a death occurred.

FamilyTreeMagazine.com is a participant in the Amazon Services LLC Associates Program, an affiliate advertising program designed to provide a means for sites to earn advertising fees by advertising and linking to Amazon.com and affiliated websites.