Montana’s American roots begin in the early 1800s, when the United States acquired the part of Montana east of the mountains from France. It was another 40 years before Britain relinquished its claim to the western section of the state.

Established in 1846, Fort Benton was the only trading post to become a permanent settlement. Steamboats brought early travelers there after a trip that took months on the Missouri River from St. Louis or Sioux City.

During the 1850s, Native Americans, adventurous explorers, fur trappers and some missionaries lived there. Jesuit priests founded St. Mary’s, the first mission, in 1841; it would become the center for ranching in the Bitterroot Valley. This early influx of settlers came from all over the world. Homesteaders appeared from the East, the South, and even the West, including Chinese and others who had originally settled in California and Oregon. The discovery of gold in 1862 brought the first major migration to Montana. Gold miners also began to farm. Their earliest settlements include Missoula, Deer Lodge and Bozeman.

The territory of Montana was established in 1864. Railroads reached it in the 1880s, and in 1889, it became a state. In the early 1900s, many homesteaders moved into the eastern part of the state, but drought in the late 1920s and 1930 prompted some to move out. 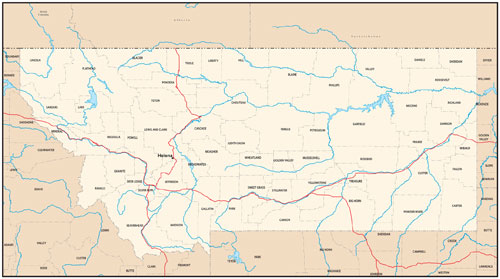 Return to the main Montana page

Find contact information for archives, libraries and other genealogical organizations in Montana.

Our county-by-county listing of Montana has contact information and dates vital records for historic and modern-day counties.

We hand you the keys to unlock your family history in the Treasure State.