The United States acquired the area that’s now Nebraska with the Louisiana Purchase in 1803. American Indians from the Cheyenne, Dakota, Omaha, Oto, Pawnee and Ponca tribes inhabited the plains of the future state. Fort Atkinson, a military outpost, was established in 1819. Fur traders and missionaries moved into the area during the ensuing decades. Emigrants following the Oregon and Mormon Trails along the Platte River traversed the area’s plains.

The Kansas-Nebraska Act of 1854 gave those regions territorial status. Nebraska territory included the state’s present boundaries as well as Montana and parts of Wyoming, Colorado and the Dakotas. Omaha was the territorial capital.

The promise of free land and the emergence of railroads encouraged immigrants and settlers from the eastern United States to move to Nebraska. The Homestead Act of 1862 gave 160 acres to families who farmed and lived on the land for five years. Settlers were mostly European immigrants, Civil War veterans and some African-Americans. Nebraska became the 37th state in 1867.

Indian conflicts and harsh living conditions caused many settlers to move on, but others arrived to take their place. By 1900, half of the state’s population was foreign-born.

Agriculture and cattle ranching became mainstays of the state’s economy. During World Wars I and II, much of the grain produced in the United States came from Nebraska. 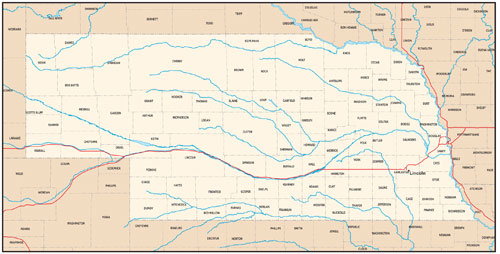 Return to the main Nebraska page

Find contact information for archives, libraries and other genealogical organizations in Nebraska.

Our county-by-county listing of Nebraska has contact information and dates vital records for historic and modern-day counties.

Harvest your family's history in the Cornhusker State.