In 2018, US Senator Elizabeth Warren published DNA evidence showing Native American heritage to back up her family’s memories of Cherokee heritage. The Cherokee Nation immediately responded with its own definition of what it means to be Cherokee, which focused on formal tribal affiliation via citizenship. A statement issued by Secretary of State Chuck Hoskin reads in part, “Sovereign tribal nations set their own legal requirements for citizenship, and while DNA tests can be used to determine lineage, such as paternity to an individual, it is not evidence for tribal affiliation.”

Hoskin provided further comment on NPR’s Morning Edition with Steve Inskeep. When asked how the Nation determines who is or is not Cherokee today, Hoskin responded:

“DNA is completely irrelevant to the process….A person living today would need to trace back to a turn-of-the-20th-century census of Cherokees living in what was to become northeast Oklahoma…the Dawes Rolls… If you trace back to that and document that proof through things like birth certificates, death records, then you can establish yourself as a Cherokee citizen.” Listen to the interview or read the full transcript.

The official website of the Cherokee Nation describes its citizens in the following way:

Cherokee Nation is comprised of the descendants of Cherokees and Cherokee Freedmen who removed here to Indian Territory (present-day northeastern Oklahoma) in the 1800s, either as “Early Settlers” prior to 1830 or through forced federal relocation commonly known as the “Trail of Tears.” Cherokees who established themselves in this new land were listed on several tribal censuses. A final federal census called the Dawes Rolls was taken of tribal citizens living here from 1898-1906. To be eligible for Cherokee Nation citizenship, a person must have one or more direct ancestors listed on Dawes.

Once you’ve documented your roots back to an ancestor who may have appeared on the Dawes Rolls, it’s time to search it. Watch the brief video tutorial below and read our companion article, “How to Use the Dawes Rolls.”

The video references this free index at the Oklahoma Historical Society (OHS) website. 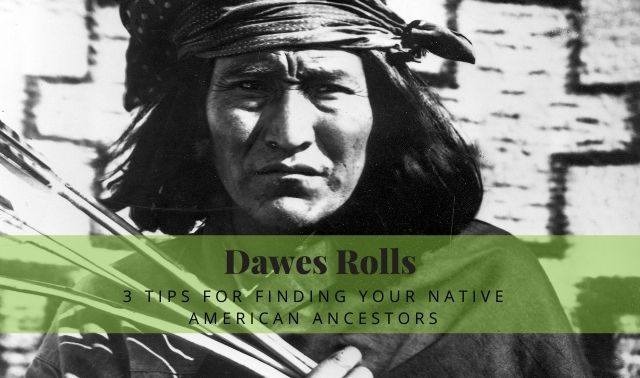 Understand how to read the Dawes Rolls to find your Native American heritage.
Family Tree Magazine