Genealogists as a group are helpful and resourceful. To do our best work and respect others’ time and expertise, we take it upon ourselves to learn the proper etiquette when engaging with archives, libraries, historical societies, government facilities and other organizations we come into contact with during our research.

This is—or should be—especially true when beginning research in a new location, language, or cultural system as well as in interactions with Native, Indigenous and First Nations communities. Each community has its own cultural norms and behaviors—many of which you may not be familiar with if you are not Indigenous or a member of that group yourself. That makes it all the more important to be respectful when contacting tribal organizations, especially since false stories about Indigenous ancestry (and Indigenous people in general) abound.

What follows are some do’s and don’ts for respectfully researching Native American ancestry, particularly if you are not Indigenous yourself.

Research what you can ahead of time

Before contacting a tribal agency or organization for help, check the appropriate rolls, censuses and other documents available through websites and government agencies. This will save tribal representatives from doing work you could have done yourself, and your preliminary research might disprove a fabled Native ancestral line outright. (For example, maybe you had an ancestor who lived on or near a reservation, but was white and working as a trading post owner, teach, rancher or missionary.)

Only after you’ve exhausted online and local sources should you seek assistance from tribal enrollment or genealogy facilities. Reach out via email first, and provide as many names, dates and places as possible. Be patient—the pandemic has impacted all tribal operations, and requests can take some time for small staffs to fulfill.

Refer to specific tribes when possible

In the United States, there are more than 570 federally-recognized tribes (and many more that have state recognition). Each tribe has its own unique culture. Terms like “American Indian,” “Native,” “indigenous,” or “Native American” ignore the differences between those cultures, and may in fact be considered offensive or racist to some. Find out what someone’s tribal affiliation is or what term they prefer to use. Many prefer to be identified by their own name, then a tribal/family relationship.

Keep in mind that tribes likely have their own names for themselves, rather than the terms historically given to them by European settlers. Many names we associate with tribes today are in fact exonyms, and may literally mean “enemy” or another negative term. For example, “Sioux” is actually the Ojibwe word for “snakes.” We instead refer to ourselves as Lakota (meaning “friend”), with language dialects including Lakota, Dakota and Nakota.

Read books and understand the history of the tribe(s) you believe your ancestor was a part of. Native communities have long, rich histories—likely including traumatic confrontations with the US government or white settlers. Know and be sensitive to these “trigger” events (such as massacres or forced removals) that are part of the tribe’s history, and take care not to bring them up in conversation.

Here are just a few authors whose work shares historical, cultural and familial information that can provide helpful context to your research:

And here are some well-researched books about Native history, each with bibliographies and extensive footnotes that will lead you to even more resources:

In addition,The Indigenous Paleolithic of the Western Hemisphere by Paulette F.C. Steeves serves as a sweeping history of Indigenous peoples in North America. And the National Museum of the American Indian (part of the Smithsonian Institution) published Do All Indians Live in Tipis?, in which elders, tribal leaders, and museum specialists answer frequently asked questions about Indigenous peoples. The book addresses many myths and stereotypes about Indigenous cultures, with pictures, book references, and examples of modern life and challenges.

Do not expect free help, and consider giving more than the requested fee. Tribal facilities (in general) are underfunded, and archival protections, storage and restoration are often not in the budget.

Be kind and appreciative with everyone you meet in the community, whether or not they’re able to help your research. Everyone is related to everyone else in a variety of ways—both spiritually and by relationship—and news about mean or inappropriate behavior toward one person will spread throughout a community.

Remember to thank those who took time to listen to your questions or give information (even a hint) about where records might be. You might even send a handwritten thank-you note or a gift card. And if, by chance, you’re invited to someone’s home, bring a gift with you.

What Not to Do

This can be difficult, as offensive language is often a casual part of broader US culture (as evidenced by the recent renamings of Washington’s football team and Cleveland’s baseball team). Some phrases to avoid include “squaw” (considered a slur, with the literal meaning being a woman’s genitals) and “redskin” (which, in addition to being a slur, invokes the bounties that settlers would place for Indigenous scalps). Other words, such as “warrior” or “chief,” have been widely misused, and should be avoided in reference to Native peoples who didn’t historically have those titles.

Likewise, questions such as “How much Indian are you?” (referring to blood quantum) or observations that someone does or doesn’t “look Indian” are offensive. As we discussed earlier, the more-polite way to ask about someone’s heritage is to ask their tribal affiliation.

Some common conversational phrases appropriate symbols or ideas from Native cultures. For example:

Each of these show ignorance of Indigenous cultures, history and values. Totem poles are sacred representations of families, values and spiritual beliefs, and powwows are social, spiritual, cultural celebrations that honor Native heritage while featuring inter-tribal cooperation and respect. In a similar way, “too many chiefs” cheapens the role that actual chiefs had in Indigenous societies; rather than generic leaders of a business team or project, these were individuals elected or born into a role with significant lifelong responsibilities. To use these terms outside of their original contexts is to disrespect Indigenous culture.

Likewise, “circling the wagons” originally refers to pioneers preparing for conflict with Native peoples. The imagery dredges up a painful history of settlers violating treaties in their continent-wide quest for land and wealth, chasing tribes from their hunting territories, killing Native peoples who stood in their way, and attempting to destroy Native ways of life (for example, shooting bison—the main food source for many Indigenous groups—for sport). Two specific instances include gold rushes in South Dakota’s Black Hills and California. “Off the reservation,” meant to indicate someone has gone rogue, similarly refers to military officials confining Native peoples to reservations, land placements that were effectively concentration camps. Individuals had to receive the government’s permission to leave.

In addition to being appropriative and offensive, these phrases can also be unclear. Instead of using them, say what you literally mean (“I don’t have enough information” or “Should we meet to talk about that?”). “Too many chiefs and not enough Indians” could be restated as “We need fewer ‘leaders’ and to work more cohesively as a team.”

Simon Moya-Smith curated an excellent list of ways non-Native people can support Native communities, including by not using certain phrases.

Many families have unsubstantiated claims about Native ancestry. Regardless of whether they’re true, your ancestor was not an “Indian princess.” And (unless he was Manuelito, Crazy Horse, Pontiac, or a few select others) your great-great-great-great-grandfather was not a “warrior” or “chief.”

Please don’t dress in clothing or jewelry that reflect sacred symbols or items: feathers, headdresses, elaborate turquoise necklaces, turtle shell purses, ribbon skirts, and so on. Yes, such items are beautiful cultural creations—and supporting Native artisans is admirable—but you should learn when, how and where to appropriately wear them. This includes not dressing “as an Indian” at sporting events, Halloween parties or festivals. Other appropriative gestures include the notorious “tomahawk chop.” Note that sports teams (or their fans) using Native imagery, names or dances on the field are not honoring those cultures.

Native spiritual beliefs have also been appropriated into wellness practices, with paid “totems,” “sweat lodges” and “vision quest” ceremonies peddled around the world. Authentic spiritual ceremonies aren’t services that one can pay for, and are often offered without the consent of Native communities or training from elders. Don’t support such services, as they cheapen and steal from Indigenous culture and spiritual leaders.

Many Native cultures establish a person’s spiritual connections to their name (both English and Native) and the use of their image. (And the older we are, the more likely we are to have strong feelings about these!) Taking unsolicited pictures of Indigenous people or of powwows or gatherings is not uniformly OK—even if you see others doing it. Ask first, and don’t simply assume anyone is willing to be recorded or photographed at powwows or in public areas.

Don’t touch someone without permission

This should perhaps go without saying, but only touch a Native person (particularly someone who is a stranger to you) in certain contexts. Traditionally, women and men don’t touch each other unless married, so even a handshake between a man and woman may be short or not very firm. Maintain a respectful distance when holding a conversation, and follow the other person’s lead when it comes to proximity or touch.

This applies to regalia as well. Regalia (which should be called that, not a “costume”!) represents spiritual and familial symbology, and is often delicate or handed down from one generation to the next. Touching it without permission is totally inappropriate.

With genetic genealogy tests readily available, there’s been a renewed interest in discovering heritage based on DNA. While some DNA haplogroups have been associated with the Indigenous peoples of North America, none of the major DNA testing companies (23andMe, AncestryDNA, and so on) can provide specific tribal identification—just a generic “Native American” ethnicity estimate. Even if they could provide a more-detailed result, ethnicity estimates are not always accurate. And DNA from an ancestor several generations ago (even one confirmed to be a member of a tribe) does not replace the cultural, family and spiritual relationships that make one truly Indigenous.

As a result, don’t assume that having a Native ethnicity listing qualifies you for membership in a tribe. (And don’t refer to yourself as Native based solely on DNA results.) Not only do tribal enrollment offices not accept DNA as proof of indigeneity, but many tribal members find DNA “membership” to be an affront to the close, deep bonds between members of Native communities. Native American DNA: Tribal Belonging and the False Promise of Genetic Science by Dr. Kim Tallbear (University of Minnesota Press).

We’re present, and actively engaged in our families, work and communities. We don’t uniformly dress in fringed leather, live in tipis, or (by default) have black hair. Tribal people have survived with strong familial ties, a sense of humor, adaptability, and ways of knowing that provide guidance in difficult times. We are proud of our heritage and culture, and we happy to share with those who respectfully and sincerely want to learn from us. 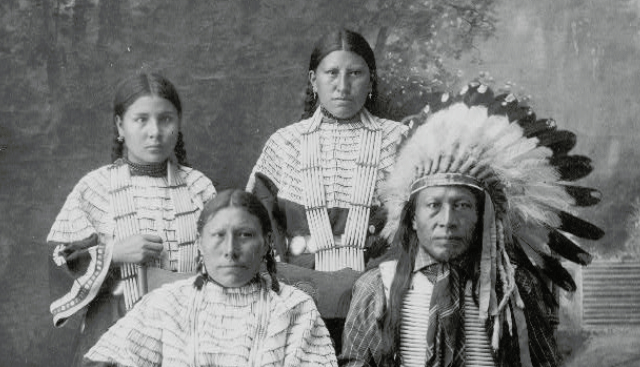 A version of this article appeared in the November/December 2021 issue of Family Tree Magazine.

If you have documented your Cherokee ancestors and you’d like to apply for Cherokee Nation citizenship, here’s how to do…