How I Did It: Found Answers in Civil War Pension Index Cards

James McCabe, born about June 1849 in New York City, has been a recent research subject of interest. We have gathered census documents, vital records, newspaper articles, etc., all trying to find hints as to his parents’ places of origin. On one of the last documents obtained, his wife’s obituary, a curious piece of information was found. Catherine McCabe’s obituary in a 1938 Jersey City newspaper specified “Her late husband was a veteran of the Civil War…” This made me pause. Because of James’ birth in 1849, I’d always thought he would have been a bit too young to serve. There was no indication in the 1910 census of his status as veteran, either. So – off down the rabbit hole we went!

I first searched the “New York, Civil War Muster Roll Abstracts, 1861-1900” on Ancestry.com. These records were compiled from muster rolls for New York units in the Civil War. There were over 50 matches for James McCabe (or similar) – but none seemed to be our guy, based on age, place of birth, enlistment location, or some other factor (killed or deserted during the war, for instance). This seemed strange – Catherine’s obituary had stated he was a member of the G.A.R., suggesting he would have been a proud (and likely documented) veteran.

Next, I turned to the 1890 Veterans census schedules. This special census schedule was meant to list all Union veterans (or their widows) living in the US. While some schedules do not survive, the ones for New Jersey do. Our James McCabe was living in Jersey City by the mid-1880s, so he should show up there… except he doesn’t.

At this point, I was worried I would need to research every single James McCabe who fought for NY – or worse, the entire Union Army. Then, I remembered that some Civil War pension index cards list a date, and occasionally even a place, of death. There are two resources available – an index on Ancestry.com (National Archives (NARA) microfilm T288), which is entirely alphabetical, and an index on Fold3 (NARA microfilm T289), which is broken down by regiment. Since I had yet to determine James’ regiment, I looked through the 87 alphabetical index cards on Ancestry.com for veterans named James McCabe who had applied for pensions… and found a match! 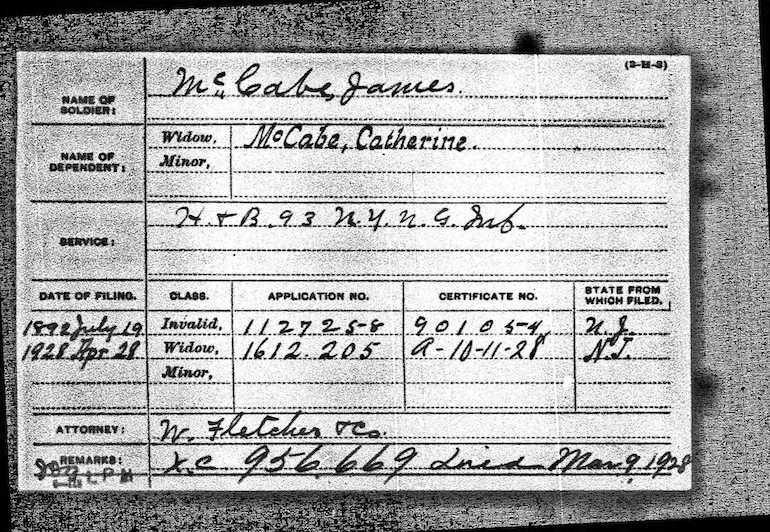 A James McCabe, who fought for both Co. H and Co. B of the 93rd NY National Guard Infantry, died 9 March 1928 – the same date my James McCabe of interest died. It also helps corroborate his widow’s name as Catherine. The index card on Fold3, under 93rd NY Infantry Regiment, Co. H, corroborates his death place as Jersey City, NJ! 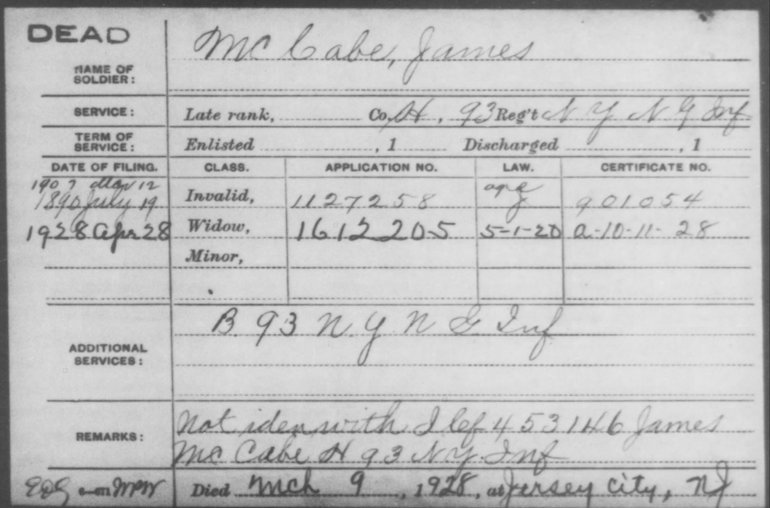 Without these pension index cards, I may have been stuck sifting through dozens of incorrect James McCabes. Now, of course, when I pulled the pensions at the National Archives last week, it appears that this James McCabe was confused with *another* James McCabe who also served in Company H… but that’s a whole other blog post.

Rich Venezia is a professional genealogist and founder of Rich Roots Genealogy, which specializes in 20th-century immigrant ancestry. Don’t miss his TEDxPittsburgh talk: How to Grow Empathy From Uncovering Your Roots. 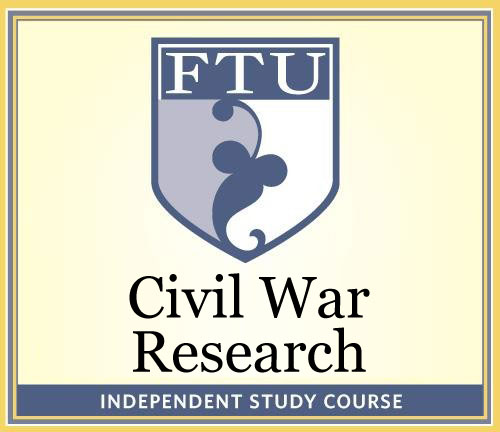 If you’re ready to master your own Civil War research, be sure to check out the Civil War Research Home Study Course. This independent study course will guide you in determining your ancestor’s service, finding the records to document it, and fleshing out your knowledge of Civil War genealogy.

How to Handle Family Secrets and Surprises in Your Genealogy

These seven genealogists made peace with difficult pieces of their family history: black sheep ancestors, infidelity, slavery and other emotional…