Let’s talk turkey. One could argue that there’s no traditional American Thanksgiving dinner. While some families roast, deep-fry or barbecue their turkey, others opt for a vegetarian alternative such as Tofurky, or forego the bird altogether. So the question is: Who put the turkey in Turkey Day, and just how traditional is this “American tradition”?

Each family has its own take on this all-American meal. For some, the traditional side dishes are cornbread, cranberries and candied yams. Others stick to stuffing, mashed potatoes and green beans. And of course, each year every gourmet magazine strives to spice up the menu with fresh spins on what it considers the old standbys.

Here’s what really happened at the Pilgrim’s Thanksgiving meal in 1621.

Reality: The Pilgrims landed first at the tip of Cape Cod. Later, they moved on to Plymouth. No one knows whether they actually stepped onto what we call Plymouth Rock—it wasn’t identified as such until 1741, when a 94-year-old man said his father had once pointed it out to him.

Myth: The Pilgrims were, well, pilgrims.

Reality: A “pilgrim” makes a journey for religious purposes. According to Plimoth Plantation staff, though, most of the Mayflower Pilgrims actually traveled for economic reasons.

Myth: The Pilgrims were Puritans.

Myth: At their first Thanksgiving, the Pilgrims dressed in black and white and hats with big buckles, and the Indians wore feather headdresses.

Reality: The photo above shows the Force School celebrating Pilgrim Day in 1920. However, the costumes are not accurate. The Pilgrims wore white, beige, black, green and brown. It was difficult to dye clothes black, and people didn’t wear buckles until later in the 17th century. The Wampanoag Indians wore deerskin garments, but not feather headdresses.

Myth: The Pilgrims and Indians ate turkey, cranberry sauce and sweet potatoes at their Thanksgiving feast.

Reality: Edward Winslow, a Pilgrim who later became governor of Plymouth Colony, wrote that the group feasted on venison and “wild fowl” (possibly ducks, geese or turkey). The settlers could’ve had corn and fruit, but wouldn’t have had potatoes, or sugar for cranberry sauce. Learn more about what was on the menu for the first Thanksgiving.

The first Thanksgiving celebration wasn’t a feast at all—no turkey, no harvest and no Pilgrims.  That’s right: Contrary to popular belief, the first Thanksgiving in the New World was actually held one year and 17 days before the Pilgrims set sail from Plymouth, England, and not a single morsel of food was involved.

Capt. John Woodlief and 37 other settlers held a short religious service on Dec. 4, 1619, the day they arrived at Berkeley Plantation in present-day Charles City, Va., after a two-and-a-half-month voyage. The group of young men, which included a shoemaker, cook, sawyer and gun maker, had set sail from Bristol, England, aboard the ship Margaret.

On the first Thanksgiving Day, they knelt down and gave thanks for their safe arrival in accordance with their charter, which stated:

Wee ordaine that the Day of our ship arrivall at the place assigned for Thanksgiving to Almighty God.

President Kennedy officially recognized Berkeley Plantation as the site of the first Thanksgiving in 1963.

George Thorpe, an Anglican priest, brewed the first bourbon whiskey in America in 1621, and Benjamin Harrison III created the first commercial shipyard in 1691. The Harrison family built the three-story Georgian manor house on the hilltop site overlooking the James River in 1726. It had the first pediment roof in Virginia and was built with homemade bricks.

Berkeley Plantation was also home to many important figures and events in our nation’s history. Benjamin Harrison V, a signer of the Declaration of Independence and three-time Virginia governor, lived in the manor house.

It was also the birthplace of William Henry Harrison, the ninth president of the United States, who gave the longest inaugural address but served the shortest term. Gen. George McClellan’s Union troops made the plantation their home during the Civil War. You can still see an old cannonball lodged in one of the outbuildings today. Berkeley Plantation is also home to the familiar tune “Taps,” which Gen. Daniel Butterfield composed while camping at Berkeley.

You can celebrate the first first Thanksgiving with a visit to the site where it all started. This historic plantation on the banks of the James River lies halfway between Williamsburg and Richmond, and it’s a spot you won’t want to miss. Follow guides in period costumes as they lead you through the basement and first floor of the original manor house, furnished with a collection of 18th-century antiques. Then, guide yourself through the lush grounds, complete with five terraces of boxwood gardens and a monument to the first Thanksgiving. Experience the same Berkeley hospitality the first 10 presidents enjoyed at the renowned Coach House Tavern, located just 100 yards from the manor house.

What did the Pilgrims eat at the first Thanksgiving?

In 1621, the Plymouth colonists and Wampanoag Indians shared a feast, which we now regard as the first Thanksgiving meal. From first-hand accounts of the feast, historians can prove that the Pilgrims and Wampanoags ate turkey and venison. But modern Thanksgiving staples such as pumpkin pie, cranberry sauce, corn on the cob and potatoes were not on the menu. Pilgrims didn’t have access to sugar and potatoes in those days, and corn would have been as grain, made into bread or porridge.

Among the dishes they could have eaten are Dutch cheese, wild grapes, lobster, cod and stewed pumpkin. The side dishes probably didn’t matter much to the Pilgrims, though. They didn’t eat a lot of vegetables and preferred meals comprised of several meats—which means that turkey probably wasn’t the focus of their Thanksgiving meal.

Seventeenth-century table manners would seem foreign at our modern family feasts. Pilgrims didn’t use forks, and they wiped their hands on large cloth napkins, which they also used to pick up hot food. They set every dish on the table at once and placed the best foods next to the most important people. Rather than pass dishes, they ate what was closest to them (forget sampling the lobster if it was across the table).

Today, many families eat Thanksgiving dinner in early afternoon. This might spring from the Pilgrims’ custom of eating the biggest meal of the day at noon. But while modern Thanksgivings emphasize family togetherness, in the Pilgrims’ day, adults sat down to eat while children and servants waited on them.

What date was the Pilgrims’ “Thanksgiving” feast?

The three days of dancing, singing and playing games known as the first Thanksgiving were more of a fall festival, occurring sometime between Sept. 21 and Nov. 11.

And to historians’ knowledge, it was never repeated. Years later, New Englanders declared days of prayer and thanks. Nov. 30, 1777, the Continental Congress recommended a day of thanksgiving after US victory in the Battle of Saratoga.

But these were days of religious observance. And while Presidents Washington, Adams and Madison declared days of thanksgiving during their terms, the practice was not an annual tradition. In fact, Presidents Jefferson and John Quincy Adams considered it an infringement on the separation of church and state.

How did Thanksgiving become a national holiday?

How did modern Thanksgiving celebrations evolve from the 1621 feast? Until Mourt’s Relation, a colonial publication that contained Edward Winslow’s first-hand account of the 1621 celebration, was rediscovered in the 1820s, Americans had forgotten the now-famous feast. This discovery, along with the 1856 publication of Puritan William Bradford’s manuscript “Of Plimoth Plantation,” which also mentions the celebration, sparked a newfound interest in the Pilgrims. This is when Americans began to associate their thanksgivings with the Plymouth colonists.

In the first half of the 1800s, the New England states had declared their own annual thanksgivings, which had become more secular and family-and-food focused. New Englanders had introduced the holiday to other parts of the country. By the mid-1800s, even Southern states, which had rejected the Yankee custom, began to celebrate  thanksgivings.

The evolution of Thanksgiving celebrations

At the turn of the century, the holiday gained popularity as immigrants, trying to assimilate to their new home’s customs, added turkey to their ethnic cuisine. But it didn’t become an official, annual national holiday until 1941.

In 1939, President Franklin D. Roosevelt broke with tradition by declaring the next-to-last Thursday of November Thanksgiving Day—after the National Retail Dry Goods Association’s requested to extend the Christmas shopping season by one week. The decision met with confusion. Twenty-three states observed the holiday on Nov. 23, and 23 states celebrated on Nov. 30. Texas and Colorado declared both days holidays. Thanksgiving football games had to be rescheduled, and no one knew when to serve the holiday meal.

In 1941, President Roosevelt admitted his mistake and signed a bill that established the fourth Thursday in November as Thanksgiving Day, which it has been ever since.

Today, Thanksgiving truly is an American tradition—though its roots might not stretch as deep as legend tells us. While menus vary by region and household, it’s a day when we come together as a nation to appreciate family and friendship. Just as the Pilgrims and Wampanoags did almost four centuries ago.

Share a Thanksgiving history slideshow with your students or genealogy group! 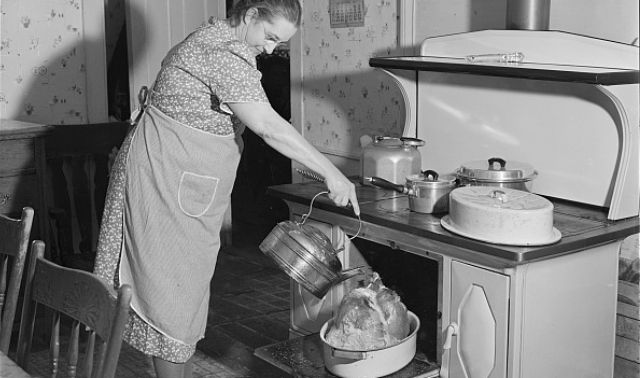 Let’s look at how our ancestors celebrated Thanksgiving, with this Best of Photo Detective collection of old Thanksgiving photos.
Family Tree Magazine