Maine is both the largest New England state and the most sparsely populated. In 1622, England’s King Charles I gave John Mason and Sir Fernando Gorges land encompassing part of modern Maine and New Hampshire. Gorges established the region’s first Colonial government. He sold his land to Massachusetts in 1677, which it belonged to until 1820.

Emigrants from Massachusetts Bay established the first permanent communities along Maine’s coast, while the French inhabited the area near the Penobscot River. Colonial conflicts between the French, English and native populations resulted in Massachusetts declaring war on all American Indians in Maine in 1703. After the French and Indian War (1754-1763) France had to give up its claim to the region. Although early settlers were primarily English, French Canadians, Scots-Irish, Acadians, and African-Americans all populated the area along with the native people.

Maine became a state in 1820 under the Missouri Compromise: Missouri entered the Union as a slave state; Maine became a free state. Boundary disputes with Canada in 1839 resulted in the Aroostook War, which was eventually settled by the Webster-Ashburton Treaty of 1842.

Farming, fishing, logging, shipbuilding, and fur trading supported Maine for much of its early history. But employment opportunities changed in the 1800s: Steamship production began at Maine’s shipyards, followed by battleships. Textile mills attracted women from all over, while urban dwellers escaped the cities to enjoy the state’s natural charms — creating the tourism industry that is still thriving today. 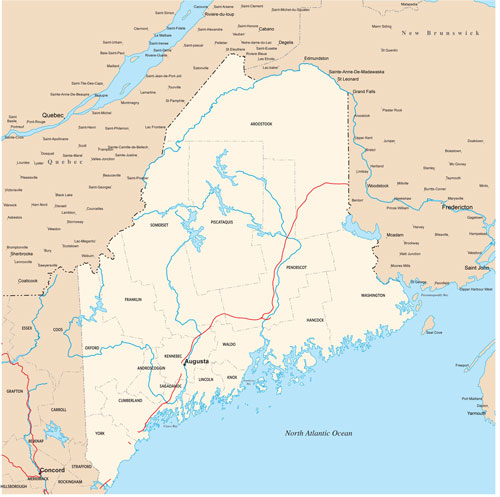 Return to the main Maine page

Researching your ancestors who lived in Maine? Add branches to your Pine Tree State pedigree with these key details and…

Ready to research your Maine ancestors? From archives to publications, these fast facts and key resources are everything you need…

Find contact information for archives, libraries and other genealogical organizations in Maine.