Question: Why might my ancestors have moved from New York to Michigan in the 1860s?

Answer: The Civil War, of course, caused disruptions across the country, and may have been a factor in your ancestor’s westward migration. Another impetus might’ve been the Panic of 1857, the effects of which lingered well into 1859. Although this financial shock was triggered in part by the Ohio Life Insurance and Trust Co. failure, those in eastern places felt most of the economic pain.

Much of Michigan was booming in the 1860s, despite the Civil War. Depending where your ancestor settled, he might’ve been drawn to lumbering in the central and northern areas or steelmaking and other heavy industry in Detroit. The growth began with the opening of the Erie Canal in 1825, creating a waterway from New York State. The population jumped 275 percent between the 1820 and 1830 censuses, and more than 650 percent from 1830 to 1840.

As southern Michigan became settled, economic opportunity and the frontier shifted northward. The Saginaw Valley, in particular, saw growth in lumbering, leading to a population increase of 270,000 between 1860 and 1890. During the same period, lumber drew about 165,000 people to west-central Michigan. Railroads also brought settlers with their tracks.

Near Detroit, home to 45,619 residents in 1860, the Eureka Iron Works produced Bessemer-type steel starting in 1864. That laid the groundwork for railroad manufacture, stove making and ultimately, the automobile industry.

By 1870, Detroit’s population had almost doubled to 79,577. Nearly half of the residents in that census reported they were born in another country. Many others, like your ancestor, migrated from other states.

Learn more at Seeking Michigan and the Detroit Historical Society website. Old city directories might help you identify your ancestor’s occupation, both in New York and Michigan, and guess at his motivation. Ancestry has an excellent collection, including more than 50 Detroit directories and “blue books.” The 1860 and 1870 US censuses also asked for “Profession, occupation, or trade.” 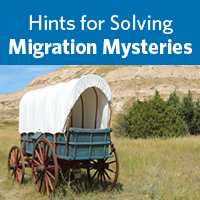 If ancestors on the move have your research going in circles, try these strategies to track where your family went—or came from. Download your copy of Hints for Solving Migration Mysteries today!