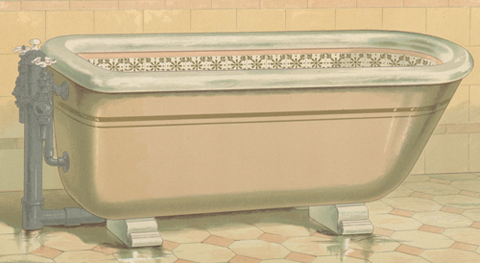 Humanity’s plumbing challenges have hardly changed in 6,000 years: how to bring clean water in and get wastewater out. Beginning in 4000-3000 BC, the Indus River Valley civilization in India made a good stab at both problems by installing the first copper pipes, underground drains and reservoirs. By about 2350 BC, houses in the city of Lothal had individual toilets connected to a brick-lined sewer system.

The Babylonians introduced clay pipes about the same time, plumbing the Temple of Bel in the Sumerian city of Nippur. Egyptians used copper for the elaborate bathrooms inside their pyramids, about 2500 BC. And the Minoan civilization on Crete built clay-pipe water and sewage systems in Knossos, with King Minos enjoying the world’s first flush toilet—an innovation that would largely disappear for the next 3,000 years.

But it was the Romans who really excelled at plumbing, constructing aqueducts and sanitary drainage systems unequalled until the 19th century. Roman fixtures were made of marble, with gold and silver fittings, and connected with bronze and lead pipes. (Whether lead poisoning contributed to Rome’s ultimate decline remains controversial, but if so lead-lined cooking vessels were likely more to blame than pipes.)

Iron pipes didn’t come along until the mid-1400s in Germany, where metalworkers learned to build fires hot enough to melt and cast iron. Even in Colonial America, plumbing still relied on bored-out logs, preferably of hemlock or elm.

For many major cities, the needs of firefighting rather than potable water drove the building of municipal water supplies. New York City installed the first public underground water main in 1830.

Not until after the Civil War did Chicago undertake the first great engineering feat to focus on bringing drinking and bathing water to homes and businesses. Twin tunnels extended two miles out into Lake Michigan to take in clean lake water. Completed in 1869, the first tunnel employed a three-foot-wide, 138-foot-tall standpipe to equalize pressure in mains throughout the city.

The system’s pumping station somehow survived the 1871 Chicago fire. In another near-disaster, a torrential storm dumped more than five inches of rain on the city in 1885. Rainwater swamped the inadequate sewage system, which simply emptied into the Chicago River, and pushed sewage well out into Lake Michigan. Only providential winds from the northeast kept the sewage out of the offshore intake, preventing a typhoid epidemic.

Disease outbreaks spurred cities to tackle the second half of the plumbing problem—what to do with wastewater. Britain, the first country to industrialize, was the first to deal with the unsanitary effects of urbanization, which had turned the Thames into a cholera-causing sewer. After the “Great Stink of 1858” during hot summer weather, Parliament tasked Joseph Bazalgette, chief engineer of the Metropolitan Board of Works, with addressing London’s sewage problem. Bazalgette designed a vast underground sewer system, with almost 100 miles of “interceptor lines” that led to two treatment plants.

In turn, the interceptor sewers were fed by 450 miles of main sewers, which carried the outflow of some 13,000 miles of local drainage. The project used 318 million bricks and 670,000 cubic meters of concrete. Bazalgette’s design helped provide the basic blueprint for sewers up to the present day.

At about the same time on the other side of the Atlantic, Julius W. Adams was building a similarly influential sewer system for Brooklyn, NY. His breakthrough was figuring out how much sewerage a given population required; because Adams published his results, cities across the country could adapt his designs to their needs.

What to do with the sewage after it left the city remained a challenge. In 1880, Worcester, Mass., built the United States’ first sewage treatment plant using chemicals to precipitate wastes. In 1912, scientists at the University of Manchester in Britain developed the “activated sludge” treatment process, which led more cities to build wastewater treatment plants. That process used two tanks, one to aerate the wastewater and another to allow added bacteria and protozoa to separate the solids and settle out.

Inbound water and outbound sewage technology came together in the ultimate expression of modern plumbing, the flush toilet. Sir John Harington, a godson of Queen Elizabeth I, invented the European flush toilet (called a “water closet,” or WC) in 1596. He built one for the queen, installed in Richmond Palace, and another for himself. But the lack of sewage plumbing for commoners hindered the toilet’s adoption—as did an unfortunate collection of puns and off-color jokes Sir John published about his invention.

Instead, people built outhouses or used chamber pots. Thomas Jefferson devised an indoor privy at Monticello that used a pulley system to haul away the chamber pots.

Nearly 200 years passed before the next breakthrough in plumbing, Scottish mechanic Alexander Cummings’ S-trap, patented in 1775. The curved pipe design used standing water to seal the bowl and prevent sewer gases from entering the house. Combined with the “venting theory,” devised in 1874 by an unknown hero who figured out how to balance the air pressure in the system with an outside “stack” vent, plumbing finally brought the toilet inside. Between 1900 and 1932, the US patent office received 350 toilet-design applications.

Bathtubs and showers were slower to catch on, not because of technological lag but due to popular opinion. Since water for bathing had for so long been unclean, many thought the practice a health hazard. As late as 1845, Boston passed an ordinance banning bathing except on a doctor’s orders.

Bathing remained an oddity, engaged in—if at all—more for quack therapeutic purposes than for cleanliness. Typical was the reaction of Elizabeth Drinker, wife of a prominent Quaker in Philadelphia, who said of the experience, “I bore it better than expected, not having been wet all over at once for 28 years past.”

As modern plumbing became widely adopted in the 20th century, however, its health benefits proved dramatic. As author and immunologist Dr. Lewis Thomas put it, “There is no question that our health has improved spectacularly in the past century. One thing seems certain: It did not happen because of medicine, or medical science, or even the presence of doctors. Much of the credit should go to the plumbers and engineers of the Western world.”

1928 | US publishes its first plumbing code

This article originally appeared in the July/August issue of Family Tree Magazine.