A couple of weeks ago, I presented several lectures at the San Luis Obispo Genealogical Society conference. I had great time and got to look at some interesting pictures. Roma Miller showed me this snapshot. 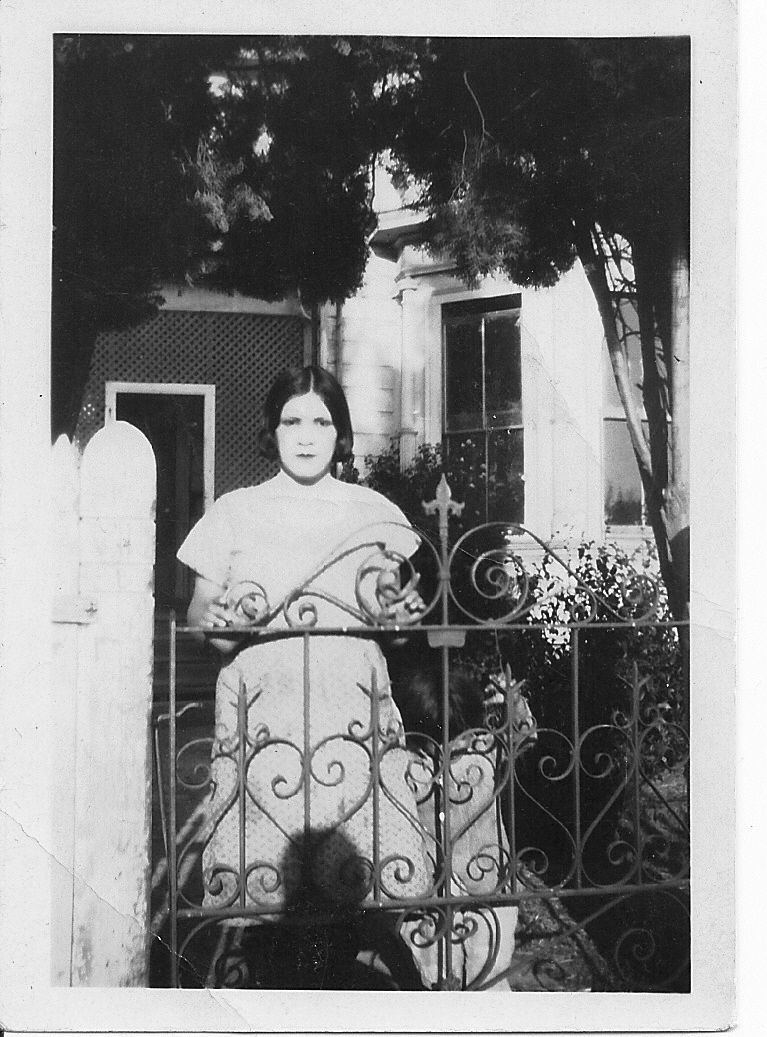 This was in Roma’s box of photos from her step-grandfather’s family mixed in with other family photos. On the back it says, “Caroline 1927.” But who’s Caroline and where was it taken?

Look carefully at this image. See the shadow of the photographer at the bottom? It’s a great shot of someone taking a picture of this woman. his or her arms are raised, holding the camera.

Next look to the right of Caroline—there is a child. This little kid wears overalls and has his head bowed down. The short pants signify a boy, as does the haircut. This “baby cut” was similar to what we’d call a bowl cut—ear-length on the sides and bangs.

Caroline wears a simple daytime dress. She’s probably busy taking care of the her child and the housework. The style of this dress makes me wonder if she could be pregnant. It’s very loose-fitting. Her hair is one of the short cuts popular in the 1920s. I think it looks a lot like either something called the “Senorita” or the “Broadway.”

The house is a two-story dwelling with a bow window in the style of the late 19th century. It’s a Victorian-style house with a tall picket fence in the front and a wrought iron gate. In the background, a latticework wall surrounds a doorway with stairs.

Roma and I talked about ways to identify this woman.

A cousin identified the woman and the location. It was a neighbor of Roma’s maternal great-aunt when they lived in Oakdale, Calif. A quick check of the 1930 federal census should result in a last name (as long as Caroline remained in the area). Roma may never know who took this picture, but it could be someone related to her great-aunt.

On the surface it’s such a simple portrait of a young mother, but when you add in the child, the house and the photographer, it’s the beginning of a story and evidence of a friendship between neighbors.

There is one other reason I love this picture. It’s a perfect example of how family collections of photos contain more than just blood relatives. There are usually friends and neighbors mixed in as well.