The trouble with women in light colored dresses is identifying the occasion. Not all dresses that appear white in a picture are that color. Many pale shades such as light blue look white in nineteenth century photographs. A woman wearing a “white” dress could be dressed for a wedding, a graduation, a first communion or for a hot summer’s day. It can be confusing.

This is another picture in Jim Te Vogt’s family album. He wonders if this could be Catherine M. Darcy when she married in 1884.

While this girl is dressed like a typical bride, this is actually a First Communion photo.

Jim researched the New York Gallery of San Francisco that took this image and found it was in business from 1869 to 1887.

Catherine M. Darcy could be this girl. She was born in 1863. Typical age for First Communion was between ten and fourteen years of age. A explanation of the history of this church rite can be found on the Catholic News Agency website.

There is another possible photo of Catherine in the album. 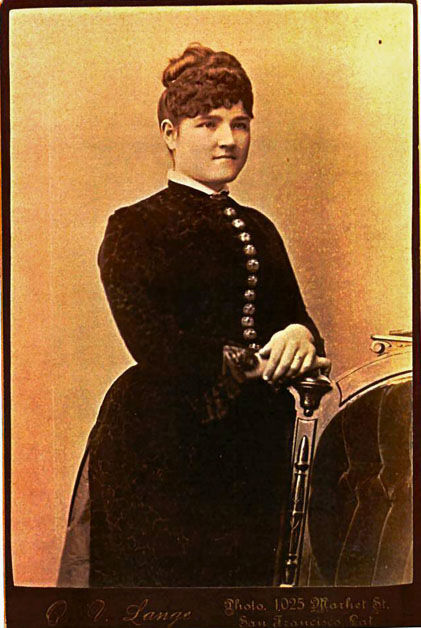 O.V. Lange of San Francisco took this photo between 1885 to 1886. The Darcy’s were the only relatives known to live in that area. The brown card stock and the dress design support a date of the mid 1880s.

Catherine married on November 25, 1884. The brocade dress fabric suggests a winter wedding, rather than a spring event. I wonder if it’s possible that Lange’s studio was in business as early as November 1884.

Queen Victoria popularized white wedding dresses, but for most of the nineteenth century ordinary women married in very nice non-white dresses. If this isn’t her wedding portrait then it was taken within a year of the event.

This lovely pair of images documents two major occasions in the Darcy family.