Wranglin’ the Truth: The Tale of Two Cowboys 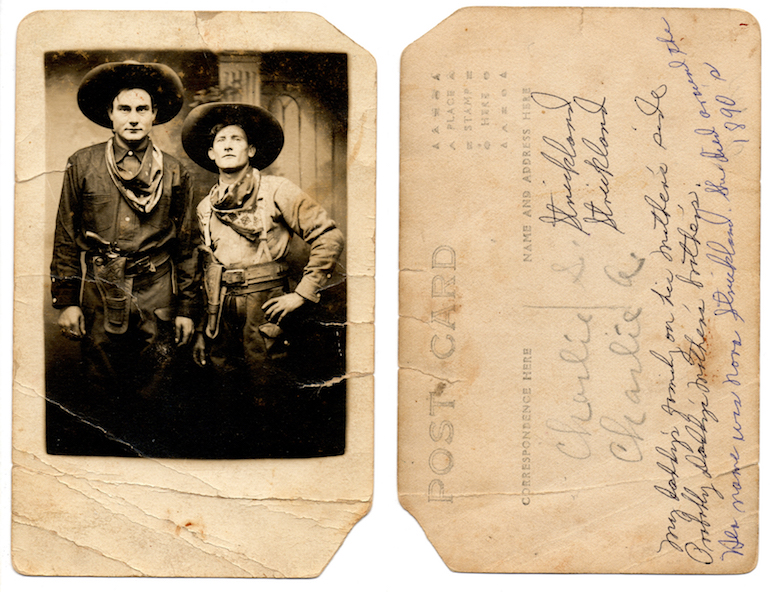 These two cowboys are driving me to distraction and it’s not their handsome faces. It’s a classic case of “who’s in the picture combined with is the caption correct.”

This picture was taken in a studio and printed as a Real Photo Postcard. That RPP designation separates it from the typical chromolithograph cards that our ancestors sent to friends and relatives. Most of the RPP’s I’ve seen were never mailed. They were just another popular photo format that debuted about 1900.

There are plenty of clues on the back. Let’s start there instead of the front. Sometimes it’s best to back into a problem.

There is a stamp box. According to Playle’s Real Photo Stamp Boxes this particular design (AZO with a right side up triangle in each corner) was common from 1904 to 1918.

Those little triangles help place the card in a time frame. There were other AZO designs with various dates.

Now the question is, does the family information on the back of the card add up to match those years or is the card mis-identified?

Cam Thompson thinks the handwriting on the back is his grandmother’s. Her father was Colure McDaniel. His mother was Annie Strickland not Nora as written on the card.

That one mistake could be a big one. It calls into question the rest of the information. It could be mis-remembered or for some reason Annie’s nickname was Nora.

On the back in two different sets of handwriting is the following:

In ballpoint someone perhaps Cam’s grandmother wrote Strickland after both of the Charlie’s. Then added “My Daddy’s family on his mother’s side. Probably Daddy’s mother’s brothers.” The Daddy refers to Colure. His mother’s side was Strickland’s. In the 1880 census Annie Strickland appears with her family but there aren’t any brother’s named Charlie or Charles.

In blue ink there is an additional note. “Her name was Nora Strickland. She died around the 1890s.” We know that her name was Annie. It appears as that on family records.

I’m a bit confused and maybe you are too. The pencil writing is not the same as the notes in ballpoint and was written by a different person. There are likely two different Charlie’s depicted in this image: one with the last name S and the other with an A.

Next week we’ll look at the front.