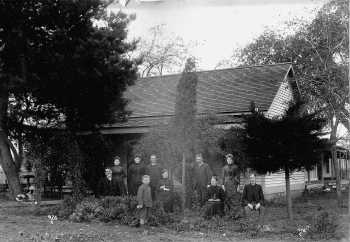 How many times have you posed with your house as a backdrop to a family portrait? Probably not as often as individuals did in the 19th century. Flash photography wasn’t available until 1884. Candles and lamplight didn’t provide sufficient illumination to photograph a large group indoors, so families often chose outdoor locations. Tracey Crow’s family found one of these pictures in the attic of a family house being torn down. She submitted them to determine when they were taken, thus possibly identifying the individuals in the pictures.

At full size, both images measure 8-7/8 x 6-1/4 inches. In the 19th century, the size of the print reflected the dimensions of the negative or vice versa.

Since Figure 1 lacks a photographic imprint, it is unknown whether the photographer was hired from a studio in the local town or was an itinerant photographer. Traveling photographers often carried all their equipment with them as they sought business from outlying farmers. The 476/G in the lower left-hand corner is the photographer’s mark on the glass plate negative.

Figure 2 is another family posed in front of their two-story house, taken by the Great Eastern Photographic Advertising Co. R.H. Gardiner (also spelled Gardener) managed the company in 1888 in Victoria, British Columbia, Oregon and various locations in California, circa 1885-1900. Curiously, it has a similar negative number 486/G.

Tracey thinks the individuals are relatives. According to her genealogical research, Walter Crow and his two sons came to California from Pike County, Mo., in 1849 during the Gold Rush, only to return home. In 1850 he went back to California, this time with four sons and 800 head of cattle. While Walter died soon after reaching California for the second time, his family continued to migrate from Missouri. The story of the 1850 trip appears on Tracy’s website.
The last family members from Missouri arrived via the largest wagon train to come overland in 1865 and settled in the San Joaquin Valley where they started a ferry and steamboat business. John Bradford Crow farmed several thousand acres and raised cattle. He bought the ferry landing to ship his product to market. A railroad eventually eliminated the need for his ferry service, and while the town of Crow’s Landing moved closer to the railroad, the original town name remained in the new location.
In both pictures, family relationships are present but difficult to decipher. In Figure 1, there could be at least two separate groups of family members present. The eldest individuals could be married or siblings. In any case, there are three generations in the portrait. Since photographers generally grouped couples together, it’s likely the man and woman standing behind the older seated woman are husband and wife, and the young man, their son. The other group is less clearly defined. The family genealogy may help uncover the relationships.
The puzzle is the boy who rushed into the picture at the last moment. The slight movement of his head to view the activity blurs his image. It looks like he’s carrying a horn. His whole stance makes it appear that he just ran into the picture once the photographer was ready. But to whom does he belong? Look under the tree on the left—even the family dog made an appearance.

In Figure 2, there are again groupings of individuals. The older couple in the center are husband and wife flanked by their son and his wife and children. Having the child posed on the horse helps create balance in the photograph so that the full house appears in this portrait. Unlike the house in Figure 1, the plantings are new and so is the house. In the first photograph, the house is a much simpler dwelling surrounded by mature trees.

The clothing details of form-fitting sleeves, buttons down the front of the bodice and hairstyles make it clear that both portraits date circa 1885-1888. The draped skirts of the younger women reflect styles current for that period. In the 1890s, women’s sleeves developed fullness over the upper arm. The clothing date agrees with the years R.H. Gardiner worked in California as an itinerant photographer. Since the pictures have similar negative numbers only ten apart suggests that Gardiner’s company took both.

What’s interesting is the family resemblance between the two older men in the images. Their long faces and ears link them together. Tracey Crow knows that several brothers migrated to California. These images are of two of the brothers and their families. Consulting census documents and vital records as well as the family genealogy should establish the identity of the individuals in the pictures. She might also want to contact family related to the other brothers to see if they also own any portraits taken around the same time as these two.

With this new information, Tracey has an excellent chance of identifying the relatives in these two pictures. She also has a new challenge: locating similar portraits of the rest of the family.
Explore Family Tree Shop for books, CDs and webinars that help you preserve family photos and solve photo mysteries.