In the United States and elsewhere as recently as the early 20th century, the death of a father meant his offspring were orphans, even if their mother survived him. Laws assumed a woman couldn’t adequately provide for or manage the welfare of the children. As a result, courts became involved with arrangements for them.

One or more guardians would be assigned responsibility for their care and welfare, even if they continued to live with their mother. This process created guardianship records that can provide valuable information about your orphaned or adopted ancestors.

The guardian(s) might have been a male relative or a couple related to either parent. Married aunts and uncles of the children may have taken one or more minor children into their home. This could result in splitting up siblings among relatives.

If the father was wealthy, he might have created a legal trust to care for a minor child’s welfare until the age of majority. Alternatively, in the cases of poor families in which neither parent survived, and/or when an appropriate guardian couldn’t be found, the court may have placed the children in an orphanage or other facility.

You’ll often find guardianship records as a part of the probate records of a parent’s estate. If there’s no will or probate file, you might find references to the deceased and the names of minor children in an index to probate court minutes. Alternatively, family court records could include details of an orphan’s placement with individuals or in an institution.

Be sure to follow the children’s places of residence from the time of the death of a parent. Other changes may have taken place after the initial guardianship appointment, such as death of a guardian, marriage or death of a minor child, or adoption by another person.

Here are some key details to look for in guardianship records:

1. The legal jurisdiction that created a record such as this one indicates the family’s state and county of residence. Look for the family living there in census and other records.

3. This is the name used on legal documents relating to the parent who has died. Use this name when searching for death records, wills and probate records.

4. You’ll learn the name of the probate judge administering the case.

5. The record gives the name of the appointed guardian(s). Subsequently, the guardian would normally file annual reports with the court until the youngest child reached the age of majority or some other change was made in the arrangement. The marriage of a female child removes the responsibility of guardianship, but a filing with the court should state the change in her marital status. Or a guardian may have administered on behalf of the children while they lived with their widowed mother or another relative. Search censuses and other records to determine where the children resided and follow them from there.

6. The judge’s signature and the date of the granting of guardianship are listed here.

A version of this article appeared in the September 2012 of Family Tree Magazine.

This bond has a mix of legal boilerplate, family history details and hints to where you can look for more information. Signed June 14, 1866 in Buncombe County, NC, it was required after Davenport Baker died, so his widow Rachel could serve as guardian to her children. Every detail may produce another lead, for example: 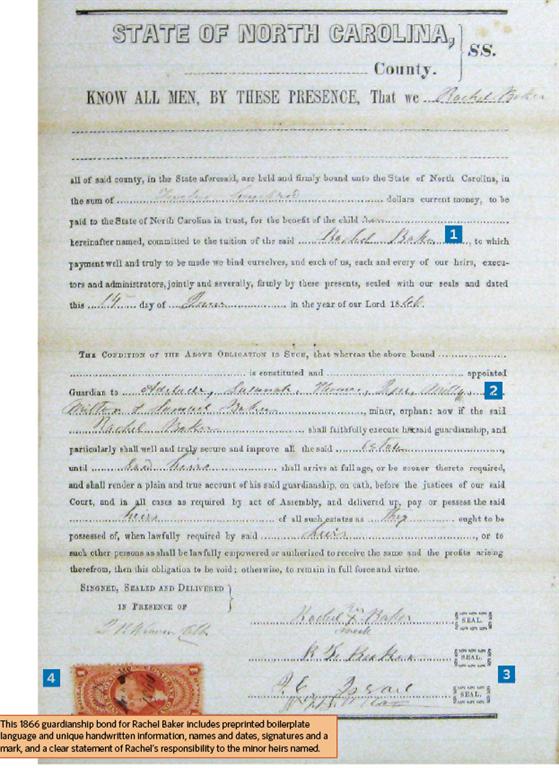 1. It wasn’t common for a woman to be a guardian. Why was Rachel named? Look to see if she was named in a will or in court minutes.

2. The bond names all of the children—even those who were of age. Look for marriage records for the older children and court minutes to explain why they were still named.

3. Two men, R.F. Baker and J.T. Israel, agreed to back up the bond. Bondsmen were often family members, so research into these men may turn up clues to a bigger family tree—perhaps even a branch nobody had known about before.

A version of this article appeared in the May/June 2013 issue of Family Tree Magazine.

6 Steps to Finding Genealogy Information in Probate Documents
Your ancestors bequeathed you a genealogical windfall in their wills and probate records. Follow these six steps to claim your inheritance.
Family Tree Magazine
How to Research Orphaned and Adopted Children in Your Genealogy 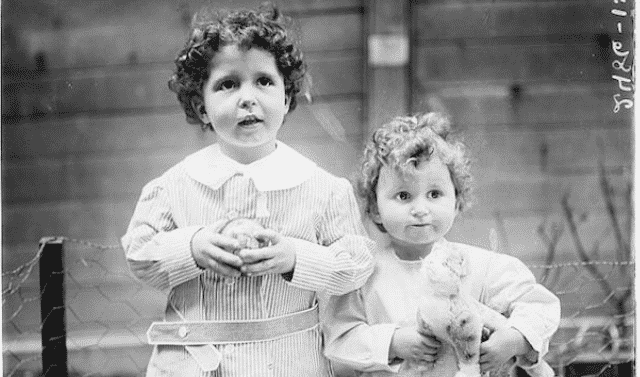 Legal adoption wasn’t common until the past century or so. Here are five historical scenarios you can use to research your orphaned and adopted ancestors.
Family Tree Magazine
16 Tips to Researching Records at a Courthouse
Researching at your ancestors’ hometown courthouse can be a cinch—if you heed these tips for a successful trip.
Family Tree Magazine

Never paged through probates in the halls of justice? Join the club. We sent a fellow first-timer to scout out…

Did your ancestor work on a construction project? Learn about this lesser-known record you can find at the courthouse.

Deciphering a Last Will and Testament Step-by-Step

Discover how to glean genealogy clues from your ancestors' wills.