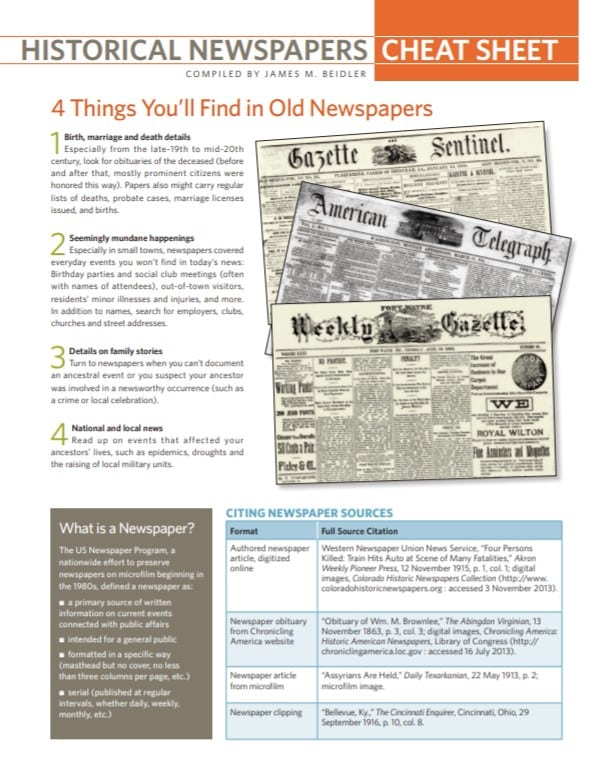 Learn about your ancestors with the Newspapers Cheat Sheet!

If I had the proverbial nickel for every time that I’ve been asked “what the best website for historical newspapers?” – well, I probably wouldn’t have to work another day in my life. Now, I judge no one for asking me this question, which usually happens after they find out that I’ve authored The Family Tree Historical Newspapers Guide.

So, how then should a researcher “zero in” on the best sites for online newspapers? First, remember that the process of finding the “right” newspapers for your search involves tracking each ancestor backwards in time – like following a trail of breadcrumbs – and understanding that mentions may occur in newspapers years after a person lives in that place.

Regardless, trying to find the newspapers that will help you starts with the “US Newspaper Directory, 1690-Present” on the Chronicling America website. This is like a master list of newspapers produced in America, developed as a work product of the U.S. Newspaper Program that began the process of preserving newspapers (then on microfilm) in the 1970s.

The US Newspaper Directory will let you choose a variety of delimiters – a particular state, city or county; time period; language – to drill down to the newspapers you want. In general, it will indicate only the existence of the newspaper, any digital holdings on the free Chronicling America website and microfilm copies held anywhere.

Check out the subscription sites

However, armed with the information on what newspapers are available, you can then better evaluate the digital holdings of subscription sites such as Newspapers.com, GenealogyBank.com and NewspaperArchive.com (available through FindMyPast.com).

Another level of tools to use in the “drill down” process are what I call “aggregators.” There are some of these that simply list online newspapers and the sites for their archival issues. Others will come back with a full search of the historical newspapers from other sites that they’ve aggregated.

For full searches of digitized content, consider Elephind.com, which has a worldwide reach of millions of newspaper issues. For lists, look at Wikipedia’s “List of Online Newspaper Archives” or Small Town Newspapers, the hub for some two hundred fifty free newspaper archives across the country. Always worth mentioning, too, is the blog named The Ancestor Hunt which aggregates state-by-state searches of the newspaper titles found on free sites such as Chronicling America, Old Fulton New York Postcards and a variety of state sites.

Millions of newspaper pages are searchable on the free Chronicling America website. Learn two of its best features in this…

Find an Obituary for a Specific Person with These Expert Tips

Learn how to find an obituary for a specific person in your family tree. These tips will help you locate…

Obituaries can be valuable sources of information for genealogists. Our Document Detective outlines the seven key sections often included in…

Now What: Tracking Down Obituaries for Ancestors Who Died en Route

Finding obituaries for your ancestors is tricky, but having ancestors who passed away while migrating west adds more complications. Here's…