Say “hoosier” and the guy sitting next to you thinks of Indiana basketball. If he’s from those parts, he might exhibit signs of Hoosier Hysteria. But the word “hoosier” was around way before basketball. Indiana historian Jacob Piatt Dunn speculated in a 1907 study that it came from an Anglo-Saxon word meaning “hill.”

Regardless of its origins, though, hoosier became a term for small farmers. It first appeared in print when the Jan. 1, 1833, Indianapolis Journal ran John Finley’s poem “The Hoosier’s Nest.” Now it’s part of Indianans’ identity. Your Hoosier ancestors’ heritage is as intriguing as their nickname, and a range of resources hold their stories.

“County-level research in Indiana is imperative,” says Curt Witcher, director of the genealogy department at the Allen County Public Library (ACPL) in Fort Wayne. “Visit virtually—if not in person—all local repositories for counties where you’re researching.” The resource-rich ACPL and its digitized records from across the state may reasonably be your first stop for Indiana research, but also look to local repositories. For example, the Kokomo-Howard County Public Library offers more than 20 databases, including county mortality schedules, vital records and burials.

As you might guess, Indiana means “Land of the Indians.” The Miami, Delaware, Wea, Potawatomie, Shawnee and other peoples once made homes there.

After the Revolutionary War, the US made Indiana part of Northwest Territory. American Indians tried to set the northern US boundary at the Ohio River, but Gen. Anthony Wayne’s 1794 victory at Fallen Timbers pushed Indians west. After the 1809 Treaty of Fort Wayne and other accords gave the entire area to the United States, most Indians migrated further west. The National Archives and Records Administration’s (NARA) Fort Worth, Texas, facility holds censuses, registers and other records for the Miami, Delaware and several other Indiana tribes. See the October/November 2016 Family Tree Magazine for American Indian research help.

Most of the Northwest Territory became Indiana Territory in 1800. A mad rush of settlers, largely from Kentucky and Ohio, helped Indiana become a state in 1816—a free state with Knox as the only county and Corydon as capital. Surveyors planned the new capital of Indianapolis with four avenues emanating from a circular street. Some lots were saved for a variety of purposes; the rest went for sale starting in October 1821.

If your ancestor was an early Indiana arrival, search the Indianapolis Donation Database at <in.gov/iara/2641.htm>. Buyers’ certificates, exchanged for deeds once the land was paid for, are at the state archives.

Search for other public-land sales between 1810 and the 1960s at the Bureau of Land Management General Land Office site. See the title or patent there, then request copies of your ancestor’s land application, or land entry case file, from NARA (learn how).

The 1800 and 1810 federal censuses included Indiana Territory, but of those records, only the 1810 Harrison County count survived. Search for early Indianans in the 1790 Northwest Territory census, 1807 Indian Territory census, 1840 military pensioners and various other records on Ancestry <ancestry.com>.

The first federal census of Indiana as a state was in 1820. You can search federal censuses through 1940 (except for the 1890 census, which was nearly entirely destroyed after a fire) on subscription genealogy websites Ancestry,
MyHeritage and Findmypast, as well as the free FamilySearch.

The state didn’t keep track of marriages until 1958, but county court clerks generally did so from the counties’ inception dates. You can search the Indiana State Library’s database of pre-1850 marriages and request certificate copies from the county circuit court where your ancestors were married.

Those researching Indiana families have several options for finding birth and death information—both before and after state records begin—online and on microfilm. Ancestry has indexes and/or record images for hundreds of thousands of statewide births (1880-1940) and deaths (1882-2011), plus millions of marriages before 2005. To find county data­sets, go to the card catalog and run a keyword search for the county name. FamilySearch’s Indiana records aren’t quite as robust, but they’re free. The site also has some births and christenings, two marriage indexes containing a million-plus records each, and an index to nearly 800,000 deaths (1882-1920).

Indiana’s lenient laws earned it a reputation as a divorce mill until the state revised statutes in 1873. Check with county court clerks for divorce records from 1852 to the present. Before then, the state legislature granted divorces.

Researchers have published a wealth of indexes to Indiana veterans, with indexes to military records and descriptions of the archives’ holdings for just about every war in which state residents have fought. In the Civil War section, you’ll also find an index for the Indiana Soldiers and Sailors Children’s Home, which served offspring of soldiers beginning in the post-Civil War era. There are also numerous veterans’ indexes. Search the free Civil War Soldiers and Sailors System and Ancestry indexes of service records for the Revolutionary War, War of 1812 and Spanish-American War (Indiana soldiers), as well as for Civil War pensions.

Books like Index to Revolutionary Soldiers of Indiana and Other Patriots by Barbara Schull Wolfe (Ye Olde Genealogie Shoppe) and Indiana Militia in the Black Hawk Wars by Carrie Loftus (Mountain Press) are also helpful. Search WorldCat for additional books and order titles through interlibrary loan if your local library participates.

In 1886, 1890 and 1894, Indiana townships enrolled veterans (or their widows and orphans) of the Civil War, War of 1812 and Indian wars. The records are at the state archives; the Indiana State Library has a card index to the 1886 listing. The data also are in the FHL microfilm Index to Indiana Enrollments of Soldiers, Their Widows and Orphans; the records themselves take up 89 microfilm reels beginning with film 1605057. You can search the 1890 count at Ancestry.

Besides repositories in your ancestral county, add the state archives and library in Indianapolis to your Hoosier research tour. Witcher praises the Indiana Historical Society (IHS) for its vast library and its County Historians program, for which you can access contacts. The Indiana Genealogical Society has started a similar County Genealogists volunteer list (find it on the society’s website under “Research”). Also check the IUPUI website’s atlases, plat books and Sanborn Fire Insurance maps. With each family tree find, you’ll generate some Hoosier Hysteria of your own.

For more information on Indiana research, head over to the Fast Facts and Key Resources! 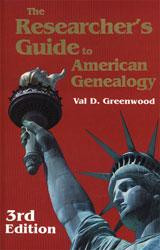 This new 3rd edition of The Researcher’s Guide to American Genealogy includes a new chapter on the property rights of women, a revised chapter on the evaluation of genealogical evidence, and updated information on the 1920 census. Arguably the best book ever written on American genealogy, it is the text of choice in colleges and universities or wherever courses in American genealogy are taught.

Happy birthday, Hoosiers! The State of Indiana was founded on Dec. 11, 1816. Celebrate its 201st birthday with this historical…

Learn about Indiana's history and available records in this research guide that includes a map and bibliography.