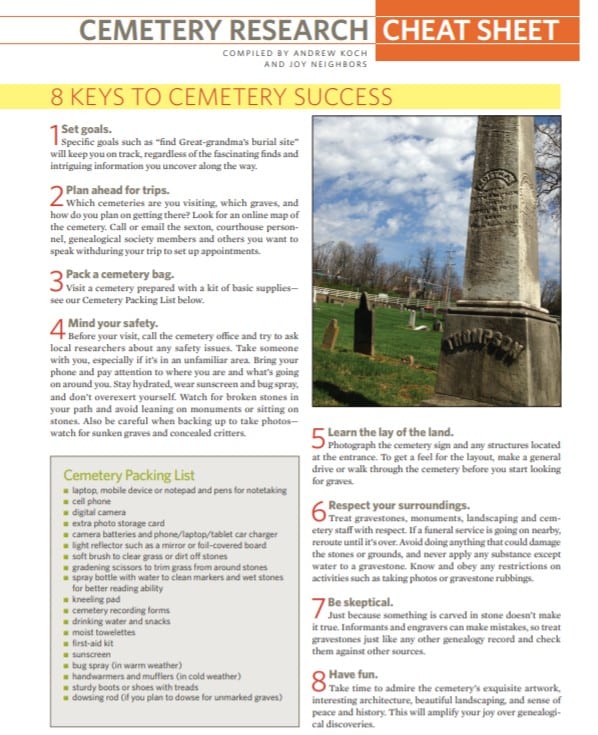 Find your ancestors with the Cemetery Research Cheat Sheet!

Order this essential Cheat Sheet to discover your ancestors in cemeteries! Find guides to popular tombstone symbols, steps for using tombstone databases and the top records you should be searching for in cemeteries.
BUY NOW

Below, you’ll see two headstones made for the same person, Catherine (Killip) Quayle, whose remains lie in Utah’s Salt Lake City Cemetery. Put your cemetery-sleuthing skills to the test by answering these 10 questions. Give yourself one point for each correct response.

1. The left stone is the original marker.

3. Catherine probably was 57 when she died because the person(s) who erected the new stone also knew her maiden name.

4. To resolve the age discrepancy, I’ll:

C. check online sources, such as FamilySearch or Ancestry.

D. check all of the above, plus additional sources if these don’t help me resolve the discrepancy.

5. The three-legged symbol on Catherine’s headstone tells me

A. that Catherine was a marathon runner.

B. that Catherine was born with three legs.

C. where Catherine was born.

6. To learn what the three-legged symbol means, I’ll

B. consult books on cemetery symbolism such as Stories in Stone by Douglas Keister (Gibbs Smith).

C. ask friends if they can identify the mark.

E. check all of the above.

7. The replacement marker consists of

8. The replacement marker likely was placed

9. The original stone is made of

A. in Salt Lake City.

B. while running in a three-legged race.

C. from complications of surgery to amputate one of her legs.

2. C.
We’ll need information from other sources to know which stone is correct.

3. False.
Whoever had this new stone placed did so several decades after Catherine died. Unless we can find out who purchased the new stone (one of Catherine’s children?) and determine that the person knew Catherine’s age at death, we’ll need to confirm her age in other sources.

5. C.
Symbols such as this one can clue you in to a person’s origin and the organizations he or she joined.

6. E.
For some of the more esoteric symbols like this one, you might have to check a variety of sources. This particular symbol is the Three Legs of Man, adopted in the 13th century to represent the armorial bearings of the Isle of Man’s native kings. The symbol still appears on the Isle of Man flag. According to the IGI and the Ancestral File databases on FamilySearch, Catherine was born in Peel, Kirk German, Isle of Man.

7. C.
You don’t have to be a geologist to learn the differences among marble, sandstone and granite. Marble is usually white with light gray or black streaks, sandstone is beige or pink, and granite is usually black or gray with flecks in the stone.

10. A.
We can assume Catherine died in Salt Lake City, since she’s buried there and the tombstone doesn’t indicate otherwise. To know for sure, we’d need to look at an obituary or death certificate.

A version of this article appeared in the June 2005 issue of Family Tree Magazine.

Has your cemetery research reached a dead end? Our genealogy experts are here with answers!