Caption Clues & How to Label Your Old Family Photos 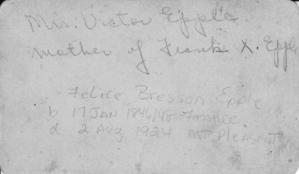 Usually you start identifying your old mystery photos with clues on the front of the picture, but on this photo, the back is more interesting. It has two sets of handwriting, each with a piece of family data.

Caption on the back of an old family photo?

The top caption is an identification: “Mrs. Victor Epple, mother of Frank X Epple.” Frank is the grandfather of reader Pamela Epple’s husband. Pamela isn’t sure who wrote the caption, but thinks it looks like her mother-in-law’s handwriting. Frank’s second wife also could’ve written it.

The best photo identifications come from people who actually knew the people in the pictures. But neither Pamela’s mother nor Frank’s second wife knew the subject of the portrait. Victor Epple (born in 1839 in France) immigrated to the United States in 1861 and married Felice Bresson in 1866 in Wayne County, Ohio. She was born in France in 1846, and immigrated with her parents in 1847.

Now let’s look at the front of the photo. It shows a young woman in a belted dress, seated in a fringed chair. This style chair first appears in photographs about 1864. 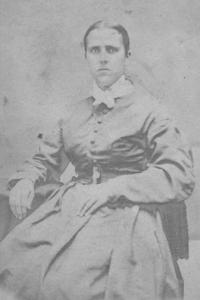 The dress, with its small collar, dropped shoulder and narrow sleeves, is typical for the 1860s. There’s no wedding ring on her
hand. This portrait could very well be Felice Bresson just prior to her wedding in 1866, when she’d be 20 years old. The details in the picture fit the facts of Felice’s life.

It’s also possible that this is a wedding picture. Before the early 20th century, brides usually married in a good dress, not a white one. And not all couples wore wedding rings.

How to label your old photos

Whoever identified this portrait thought it was worth writing down the woman’s name before it was lost. Don’t you wish all your relatives had done the same? Avoid future family photo mysteries by identifying photos you know. Just write the name lightly with a soft lead pencil on the edge of the back.